Planning a ‘revolution’ in only 90 days

Planning a ‘revolution’ in only 90 days 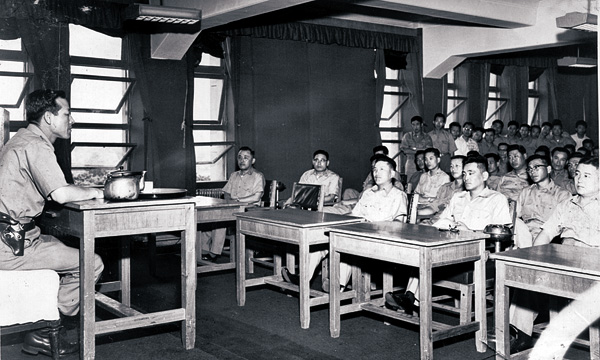 Kim Jong-pil, far left, head of the main spy agency, the Korean Central Intelligence Agency, now called the National Intelligence Service, gives a special lecture to top-ranked Marines during a visit to the Marines headquarters in Yongsan, central Seoul, on July 28, 1961, two months after the May 16 military coup. Provided by Kim Jong-pil

This is the fifth in a series of articles on the life and times of Kim Jong-pil, a two-time prime minister, based on extensive interviews with the 89-year-old. This article deals with how Kim and former President Park Chung Hee came together to plan and execute the May 16, 1961, coup to crack down on corruption and remake South Korean society. They branded the coup a “revolution.”

It took us three months to push through the May 16 military revolution. Many have asked how we were able to carry out the plan successfully within such a short time period, finding it improbable that we took over a country with only three months of planning and preparation. To be exact, it took 87 days in all. Of course, we had talked about the revolution before. But we were just exchanging thoughts and dissatisfactions with national affairs on a sketchy basis without indulging in concrete plans.

Feb. 19, 1961, is the date on which Park Chung Hee and I concurred on the need for revolution and determined we should be the ones to carry it out. At the time, I was a civilian after the military discharged me for demanding the military dismiss its leadership. Park was the deputy commander of the Second Army in Daegu after he was demoted from deputy chief of staff of the Army headquarters’ strategy bureau.

On that fateful day, we decided to take action together.

For 11 days between Feb. 4 and Feb. 15, I was locked up in a military prison on charges of mutiny because I, along with 15 other men in uniform, led a campaign openly demanding the dismissal of senior military officials. Determined to make our voices heard, I demanded all three-star generals to resign from their posts for their utter incompetence and rampant corruption. Locked behind bars, I had to endure 11 freezing days during which the temperature went to minus 10 degrees Celsius with only two thin blankets.

Some called it an act of blatant disrespect for the higher chain of command. To this day I do not agree with that criticism. We [the revolution planners] were already moving ahead on the flow of history. My demand was not an act of disrespect for my superiors, but was an act to correct longstanding ills plaguing the organization to which I was devoted. I deemed the Republic of Korea could stand strong and resilient if the military acted in accordance with principles and rules. Because no matter how incompetent and corrupt politicians are, the passage of time will fix those problems in the long run if the military stays strong and transparent.

But those generals with their stars vowed to oust me from the military for my demands. They must have thought, “This arrogant lieutenant colonel has no idea what he’s doing. It’s time to shut him out.”

About 10 days after I was thrown in jail, Provost Marshal Gen. Cho Heung-man paid me a visit.

He demanded I offer my resignation from the Army, saying he would overlook all the trouble I had caused to the military if I stepped down. I turned down the offer and demanded he send the case to a military court so I could make my points clear in my defense.

“I will leave the Army only after I tell everyone in a courtroom that all corrupt military generals must be let go,” I said.

I thought giving my defense in a military trial would serve as a good opportunity to let the public know the depth of corruption and incompetence plaguing the military.

“If you are persistent, then I will hunt down your brother-in-law [Park Chung Hee],” he said. “I will turn him into an unwavering commie by deploying all 700 military police personnel as well as those from the military’s crime investigation division if necessary.”

It was a warning that reflected Park’s history: More than 10 years earlier, he almost landed on death row for being a socialist. There we were again, targeting Park for his alleged faith in Communism. I asked whose idea it was to charge Park for being Communist. He said the idea came from the Army chief of staff.

I was utterly dumbfounded. All the accusations that Park was a pro-North faction member were cleared at the outbreak of the Korean War when he was reinstated to the military as a major.

After the war, he even studied abroad in the United States and made his way into the position of major general. The chief of staff was literally forcing me to capitulate so I could save Park.

I hadn’t seen Park since June 9, 1960, at Army headquarters. It had been over half a year. And yet, the military leadership seemed to deeply suspect that Park was behind my campaign against corrupt generals.

I told him Park had nothing to do with my campaign and it was too much of a stretch to suspect him just because he and I were related through my wife, who was his niece.

But I had no choice but to give in. I decided to leave the Army. I knew the military would have no trouble at all fabricating evidence that would link Park to the pro-North side and make his life miserable if I did not budge.

On the day I was discharged from the military, Feb. 15, 1961, I stayed at my house with a profound sense of disappointment and anger. That day happened to be the 10th anniversary of my marriage. My wife patted my back trying to console me.

At that moment I realized the time had come for revolution.

Four days later, officers who participated in my campaign for a better military gathered at my house. We exchanged ideas on how to make a revolution possible. During the heated discussion, an image of Park Chung Hee crossed my mind.

The next day I boarded a train heading to Daegu, where Park was stationed. Sitting before Park, I said, “The time has come to carry out the revolution.”

Park was startled at what I said. But he said he had also thought about the need for revolution and had prepared on his own. He asked me how many military units I could mobilize. I said two reserve divisions near Seoul.

“I have also prepared to mobilize two frontline reserve divisions,” he replied.

After confirming that we were together in the same boat, I told him, “From now on, you have to be in front to lead us.”

Park nodded, “OK,” he said. “The north of the Han is up to you while I will take care of the south of the river.”

In retrospect, I might not have set in motion the revolution had I not left the Army. When I was discharged, I was immensely disappointed. It was only after my dismissal that I began detailing a plan for revolution.

An ambition by its nature is kept in one’s heart for a long time. But once an ambition is expressed in words, the next step is to put it in motion.