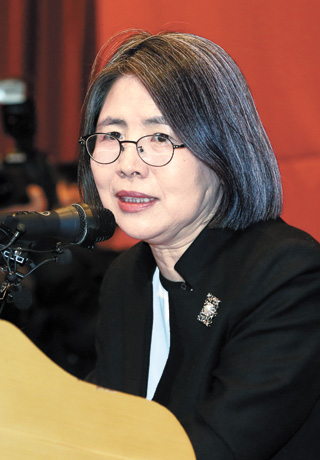 Kim Young-ran, the former chairwoman of the Anti-Corruption and Civil Rights Commission who first proposed the controversial anti-graft bill, publicly criticized the law that was passed by the National Assembly a week ago.

In a press conference held at Sogang University, Kim said she was sorry that the bill differed from the one she suggested in August 2012, although it is still worthwhile.

“The bill is only a partial success because one of the main points of the original plan, which was to prevent conflicts of interests, was omitted,” said the former Supreme Court justice. “Preventing conflicts of interests means prohibiting public officials from pursuing private benefits and plays a very important role in anti-corruption.”

Preventing civil servants from pursuing private benefits covers a range of issues, including banning government employees from making contracts with companies that employ their relatives or from taking similar executive positions after retirement.

Those regulations were important parts of the original bill suggested by Kim, along with prohibiting civil servants from accepting bribes and accepting unlawful requests for favors.

Kim also criticized the law for excluding elected government employees, such as lawmakers, from being punished for accepting unlawful requests for favors, claiming that it might allow them work as brokers.

The law has been criticized for being too broad in its scope since it covers private school teachers, journalists and the spouses of public servants. The broadness may open the law to constitutional challenges, but Kim defended it. In the case of covering the spouses of civil servants, Kim said the law should have been even broader given past cases in which siblings and children of former presidents were involved in corruption.

Kim also said that she doesn’t believe including journalists and private school teachers is unconstitutional.

“It is true that the coverage was expanded too quickly into the private sector without reaching a social consensus,” Kim said. “But I believe it is not unconstitutional and the law should take effect in the private sector after it is applied in the public sector first.”

Concerning a constitutional appeal filed by the Korean Bar Association and Journalists Association of Korea, Kim said she will “respect the decision of the Constitutional Court and wait for the result.”Following Tuesday’s press conference, the ruling Saenuri Party and main opposition New Politics Alliance for Democracy immediately responded and said they respect Kim’s opinions, though they did not comment on lawmakers being spared punishment if they accept unlawful requests.

“We welcome Kim’s remark that she does not think expanding the coverage to the private sector is unconstitutional because it means that she respects the National Assembly’s decision,” said Saenuri Party spokesman Park Dae-chul. “We also agree that there should be measures to prevent violating freedom of speech.

“And when it comes to the preventing conflict of interests, it is possible for that to be further discussed at the National Assembly.”

Park added, “We also hope the public understands that the lawmakers restricted the coverage to only spouses among family members after a long discussion.”