New U.K. envoy did a homestay

New U.K. envoy did a homestay 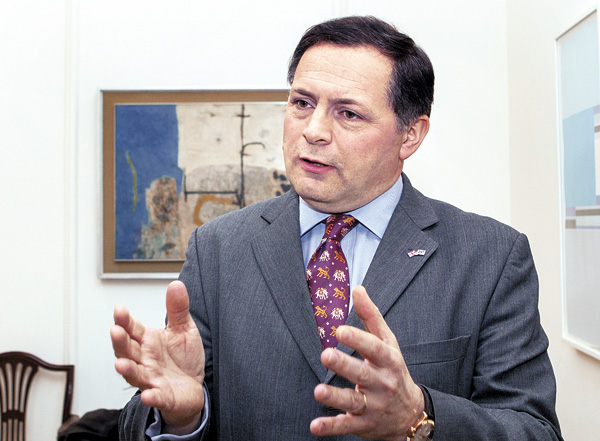 New British Ambassador to Seoul Charles Hay talks with reporters from the local media on Wednesday at his residence in Jung District, central Seoul. By Park Sang-moon

In his first press conference Wednesday, the new British Ambassador to Seoul, Charles Hay, said the relationship between the United Kingdom and Korea has “never been as good as it is at the moment,” and that he looks forward to helping improve the bond.

“As you look across at all different things we deal with together,” Hay said, “I think the relationship [between the two countries] is absolutely excellent.” He specifically cited the sectors of business, culture, education, science innovation and international politics.

In regards to North Korean issues, the diplomat, who took up his post early last month, said that although “the U.K. doesn’t have a particularly special role” in the international community when discussing denuclearization of the North, “obviously peace and stability here, as elsewhere in the world, is extremely important to us.”

The 50-year-old lamented the knife attack on U.S. Ambassador Mark Lippert last week by a radical anti-American activist, saying it was “shocking and saddening” to see his counterpart from a “neighbor” country falling victim to violence.

Hay was quick to add that he thought the incident was a “very unexpected” thing to happen in Korea given that the country is “probably one the safest places in the world.”

His wife and two daughters - ages 6 and 9 - are living proof to that, he implied, as they are very quickly accustoming themselves to their new lives in Korea.

My daughters are “busy learning Taekwondo and Korean,” he said. “In fact, my oldest daughter specifically asked to have a Korean vocabulary book for her Christmas present, and she makes me test her.”

Having recently ended a three-week homestay with a local family in the southern port city of Busan, Hay said the experience was “linguistically challenging” but that his temporary family members were kind and generous enough to help him understand Korean current affairs.

“While I was in Busan, I visited the shipyards on Geoje Island, and that was very important” he said. Hay was able to see a nearly completed version of one of the four Military Afloat Reach and Sustainability (MARS) tankers ordered by Britain’s Royal Fleet Auxiliary in 2012.