Korea prepares its exporters for FTA with China

Korea prepares its exporters for FTA with China 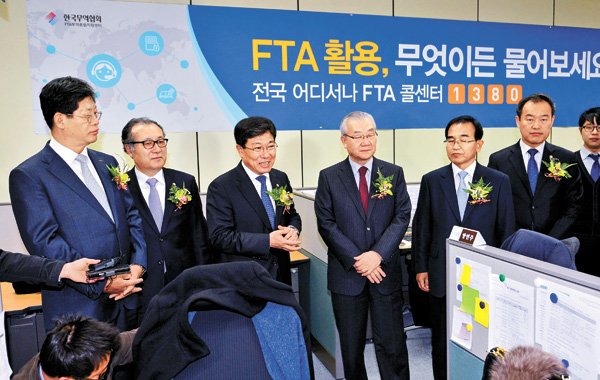 Korea is preparing for life after the Korea-China Free Trade Agreement (FTA) goes into force by encouraging small and midsize exporters to make the best use of it.

More than 500 trade experts from the government and academia as well as existing and potential exporters attended the forum jointly held by the Ministry of Trade, Industry and Energy; Korea Trade-Investment Promotion Agency (Kotra); and Korea International Trade Association (KITA) at COEX Convention Center, southern Seoul.

“Despite China having lowered its economic growth goal to the 7 percent range this year, the country still is the world’s second-largest economy and holds plenty of business opportunities in its domestic market,” said Park Han-jin, head of the China business department at Kotra.

According to KITA data, China is Korea’s largest export market. Korean exports to China were about $1.7 trillion last September, about 12.3 percent of Korea’s total exports.

“Korean exporters should focus on diversifying their range of products and retail strategies instead of simply relying on tariff reductions,” said Choi Yong-min, head of KITA’s Beijing office, “in order to take advantage of different customer bases that show different consumption cultures depending on the regions.”

High-end markets in fashion and food might be one of the brightest export possibilities as the number of wealthy people in China grows, Choi added.

A China FTA help desk was opened Wednesday to assist local small and midsize export companies make the best use of the Korea-China FTA.

The desk is run by KITA.

As of now, the help center will have a team of nine trade experts, each with a different specialty in the Chinese business environment, such as basic FTA rules, customs, trade law and place of origin rules.

After the Korea-China FTA goes into effect at the year’s end, the help desk will have six additional experts to provide practical consulting services on intellectual property, international standardization and Chinese sanitary and inspection standards. This will help exporters respond to non-tariff barriers.

Kotra plans to open four additional FTA support centers in Beijing, Qingdao, Shanghai and Chengdu - cities with lots of trade with Korea - by the end of this month.