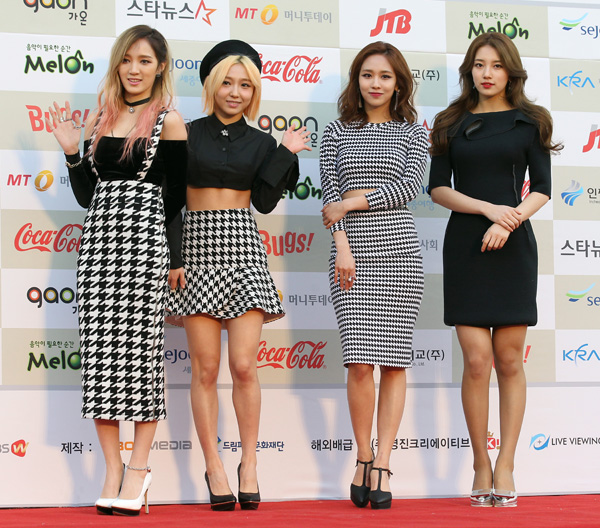 Girl group Miss A will bring out their next album later this month.

It was previously rumored that the girl group would release a new album in April, but JYP Entertainment, the band’s agency, decided to move up the release date.

According to an exclusive report Wednesday by Ilgan Sports, an affiliate of the Korea JoongAng Daily, the four-member group is adding the final touches to the upcoming record.

The report also said that the band is likely to compete with other high-level K-pop groups such as Big Bang, Exo and FTIsland, which are all scheduled to release new albums later this month.

With the new album, Miss A reportedly wants to go beyond the unprecedented hit of “Bad Girl, Good Girl,” the title track of their debut.

“‘Bad Girl, Good Girl’ was a huge hit and we find ourselves comparing the new title with it because we always think a new title should be better than the debut song,” the group said in a past interview with Ilgan Sports.

Miss A debuted in the music scene in 2010 with the digital single “Bad Girl, Good Girl.”

The group soared to stardom with the upbeat dance song and high level of acrobatic dance moves upon its debut.

Miss A has been away from the music scene for one year and four months.

The previous album of the girl group was “Hush” released in 2013.

Although four members of the girl group - Suzy, Fei, Min and Jia - have not performing as Miss A, each has been pursuing her solo career.

Among all the members, Suzy had the most prolific career last year.

She signed endorsement deals with numerous products, from clothing to drinks to coffee, and recently finished shooting a period film titled “Dorihwaga” with actor Ryu Seung-ryong.