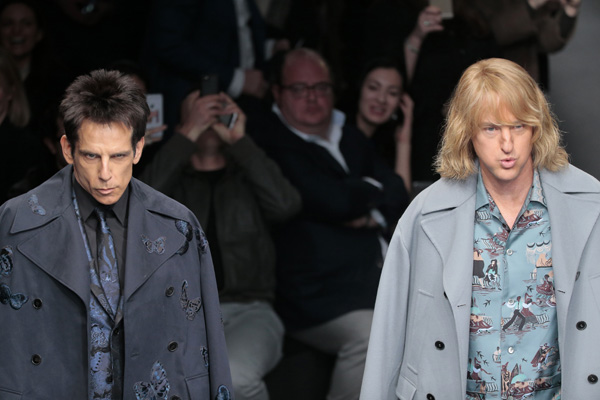 PARIS - To deafening cheers and a stunned celebrity front row, Owen Wilson and Ben Stiller closed Valentino’s Tuesday show by storming the catwalk in a headline-grabbing stunt to announce “Zoolander 2.”

Here are the highlights of the fall-winter 2015 Paris ready to wear collections:

To great bravado, the two Hollywood stars reprised their roles as male models Derek Zoolander and Hansel, immortalized in the hugely popular 2001 movie, on the catwalk for Valentino’s show.

The sequel will hit U.S. movie theaters on Feb. 12, 2016, Paramount Pictures said in a statement. It said Stiller and Wilson will again star in the movie, which will be written by Justin Theroux and directed by Stiller.

It was such a surprise that the audience immediately whipped out their phones to catch the moment.

Black was the touchstone for designers Maria Grazia Chiuri and Pierpaolo Piccioli who produced a beautiful fashion ode to women for their Valentino collection.

It was a bold start - a series of cinched-waist silhouettes in black and white geometric stripes and checks merged into some beautiful trompe l’oeil bibs that flattened the chest with loose pants.

The inclusion of the Zoolander troop was a nice touch, and shows that this age-old house doesn’t take itself too seriously.

Lagerfeld takes a job behind a bar

Karl Lagerfeld was caught moonlighting as a barman at “Brasserie Gabrielle” in Paris on Tuesday - but never fear, Chanel’s couturier hasn’t given up his day job.

The 81-year-old workaholic designer was merely posing for the press at the giant French brasserie he recreated inside the Grand Palais for Chanel’s latest ready-to-wear display.

And what a fall-winter show it was.

It was a relaxed affair, with some models even taking the time to chill at tables marked “reserved.” The realism of the set was astounding with its coffee machines and “no mobile phones” signs - and even, said the designer, down to the fact that the models just had coffee.

Lagerfeld’s designs showed off outstanding details. The black-and-white ’50s block shoe - a black toe on a thick square heel - defined the show, a look that Lagerfeld resurrected from the Coco Chanel archive for the first time ever.

There were several fantastic plays on the “penguin”-like French waiter and French maid uniforms ubiquitous among Paris’ posher restaurants.

A black menswear jacket came with a bowtie and a voluminous white silk ruffled skirt. Elsewhere, white waiters’ bows were abstract and embroidered on a loose, diaphanous skirt. And some must-have clutch bags were in the shape of stacked plates.

It produced a play of subtle, but powerful, contradictions and confirms that Van Herpen, who won 2014’s prestigious ANDAM fashion award, is now becoming an important player on the Paris ready-to-wear calendar.

The key to her success is where science meets art: the twinning of new technologies with a roaming creative mind.

Here, Van Herpen developed a translucent stainless steel weave that was seen in several incredible looks, including one where the skirt seemed to grow out of the model’s back and curve round the front like a basket.

It was one of the most creative displays seen all season. AP