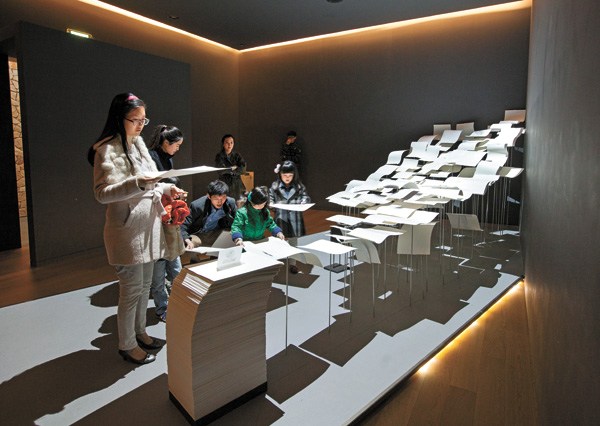 Children at Paper Gallery in Museum SAN, Gangwon, hold paper to see if they can cast shadows under the light. By Park Sang-moon

With the widespread use of smart devices that enable electronic writing and reading, many people predict that the use of paper will continue to diminish rapidly.

But for Hansol, a company that has sold quality paper products since its establishment, just one sheet is too precious to be shredded.

To commemorate the value of paper and to study how adaptable it can be in the artistic world, the company has been operating Museum SAN in Gangwon, right next to a ski and golf resort it manages in Oak Valley, Wonju City.

“It may look like digitalization has threatened the future of paper, but in a different aspect, paper is actually evolving to something beyond a method that enables recording and delivering information,” said Kim Jin-man, a vice president at Hansol Group’s communications team, adding that there has been increasing demand for bespoke paper.

“In this era of social and cultural changes, we are trying to share a healthy understanding of what paper is so that more people can picture its future.”


Documenting the history of paper

How the use of paper has changed over time has been documented by adviser to Hansol Lee In-hee.

The eldest daughter of Lee Byung-chul, the founder of Samsung Group, collected paper-related relics or artifacts as it was her dream to one day build a place to house her entire collection.

The company eventually started planning the museum in Gangwon back in 2006.

After years of preparation and construction, Hansol Museum finally opened in 2013, which later changed its name to Museum SAN, an acronym of space, art, and nature.

The gallery is dedicated to showing the changes that the paper industry has seen in Korea, alongside other halls that feature contemporary art.

“We thought talk about the ‘deadly future of paper’ comes from people’s lack of understanding on the function of paper,” said Kim.

“As a company that has been making paper for the past 50 years, we wanted people to know that paper isn’t the aftermath of outdated technology but an essential resource that exists in people’s lives.” 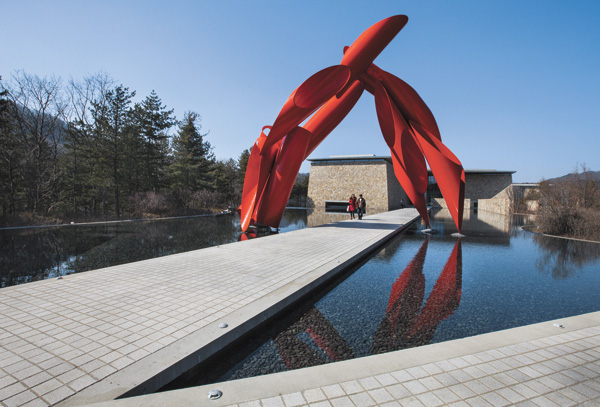 Inside, Museum SAN has a water garden that connects visitors from the welcome center to the main galleries.

Hansol already had a paper museum when it opened its institution in Gangwon. Hansol Foundation of Culture, established in 1995, opened the Jeonju Paper Corporation Hanji Museum in 1997 in Jeonju, South Jeolla, where the company’s paper factory is located.

It carried the title of being the first museum in Korea specializing in exhibiting paper, which included a variety of national treasures or cultural heritage items.

While many companies build such cultural landmarks in Seoul, Hansol set up its newer museum in Gangwon instead, which is not known for its arts scene.

Although about a two-hour drive away from Seoul, the museum has been surpassing its forecasted number of visitors annually. It welcomed 69,000 people the year it opened - double what it anticipated. The number grew further to more than 100,000 last year.

“As we become a stable operation, we also plan on promoting the venue more widely by hosting smaller private events at the museum,” said Kim Bo-mi, an official at the institute’s public relations team.

To provide fresh insight into how the use of paper evolved from 100 years ago to the present time, Hansol’s Museum SAN will start its second special exhibition next Friday at its Cheongjo Gallery. It will focus on hanji, traditional Korean paper, and how versatile it can be.

In ancient times, hanji was used merely as a medium for scholars to write down their learnings or to paint landscapes they witnessed or fantasized about.

But the usual black ink and white paper combination has evolved further, with more color added in this modern-day exhibition.

By using a collage technique, artists such as Han Ki-joo made hanji three-dimensional. They delved deeper to redefine the essence of hanji, from a simple material that carries ideas to an item made malleable for creative work.

From left: Three works of art will be shown at Cheongjo Gallery’s new exhibition on hanji, or traditional Korean paper, at Hansol’s Museum SAN beginning March 20. Right: A copy of Avatamsaka Sutra (The Flower Garland Sutra), Buddhist teachings printed from the woodblocks of Tripikana Koreana. Provided by the museum, Park Sang-moon

“This exhibition will be the epitome of contemporary arts made or inspired by hanji since the 1980s when hanji started to be reckoned as one part of an art genre,” said Choi Yong-june, the museum’s chief curator.

“It might be a good chance for visitors to see how the unique character of hanji can mix well with contemporary art to make a new landscape for the arts.”

The exhibition is scheduled to last until August.

The curating team has high hopes for the venue. They will continue studying the artistic elements of paper and featuring the beauty of it, which people seldom recognize in their everyday life.

The museum also plans to have a biennale or a triennale on paper crafts that can shine more light onto the arts space in Gangwon.

To signal that the museum is dedicated to the evolution of paper, the Paper Gallery, which houses the permanent collection, starts from a greenhouse with the papyrus plant, from which the English word “paper” originated, growing inside.

The production of paper is also explained in detail, along with displays of rare paper-making machines. One is in operation, showing visitors how pulp was used to create paper.

The exhibit then expands to show crafts made out of paper, including jewelry boxes or snack holders, to national treasures such as the first edition of the Buddhist teachings Avatamsaka Sutra (The Flower Garland Sutra), which was printed from the wooden blocks of Tripitaka Koreana.

The museum is an excellent place to learn how Korean ancestors used paper to hand down knowledge to the next generation.

“The company has collected much of its relics and artifacts related to paper, which has high artistic value but rarely has any value as a financial asset, such as lithographs and drawings,” said Choi.

For youngsters who may want to indulge in a more hands-on experience rather than looking at displays through glass windows, the museum has prepared opportunities for children to play with paper.

In the last exhibition hall for the Paper Gallery, the museum has a piece of art that looks like a wave made from white paper. The piece, called The Breez, was created by a group of German artists called Art + Com.

Any visitor can pick up a piece of paper from the installation and cast shadows onto it under a light that makes it look like black ink has fallen from the ceiling.

Furthermore, to accentuate the use of paper in arts, the museum chose to demonstrate how to make lithographs.

Children can create their own stamps or use the museum’s to provide an individual touch to paper. They can also make an origami doll out of the stamped paper.

Hansol does not refrain from showing what paper can achieve. It provides books and collections of paper, so that children from less-privileged households can have the chance to read.

The company’s Hansol Education, a foundation that focuses on social work in education, is currently recruiting college volunteers who are willing to help young children develop healthy reading habits.

The foundation is taking applications until March 25, and the selected volunteers will have 16 sessions with the children every other Saturday from next month.

The foundation has been working closely with regional offices in Gangwon and has donated books and bookshelves to childcare centers there.