Gov’t to back construction SMEs

Gov’t to back construction SMEs 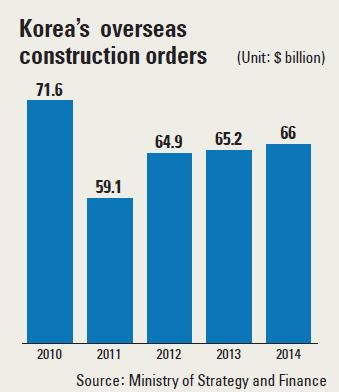 The government will offer financial guarantees for small or midsized companies (SMEs) that bid for overseas construction orders, as part of efforts to expand Korea’s participation in the international construction industry.

“[The government] will adopt the joint guarantee system in cooperation with the Export-Import Bank of Korea, Korea Development Bank, Construction Guarantee and Seoul Guarantee Insurance, to expand support for SMEs’ participation in the overseas construction businesses,” said Joo Hyung-hwan, deputy minister of the Ministry of Strategy and Finance, during the first conference to discuss winning international construction and plant-building projects at the Korea Federation of Banks’ headquarters in central Seoul on Wednesday.

“The effect of the current polices to help Korean SMEs and private financial institutions win overseas projects appears to be unsatisfactory,” Joo said. “To enhance support for the SMEs and private institutions as well as develop new markets and higher-value-added businesses, we plan to take a plenty of measures and increase their effectiveness.”

Despite the government’s previous support, the amount of projects won by Korean SMEs declined to $3 billion worth in 2014, from $3.6 billion in 2013, statistics show.

“So far, unlike conglomerates, SMEs have had difficulties winning bids for overseas construction projects due to their relatively poorer financial positions,” said Yoo Hyung-cheol, an official of the Division of International Economy Policy at the Finance Ministry. “So we decided to offer guarantee services for those companies in cooperation with state-run banks.”

The government will also give monetary support to private local banks that provide loans with low interest rates to SMEs.

According to the Finance Ministry, the state-run Export-Import Bank of Korea will fund low-interest rate loans for SMEs, which will be given through local private banks. The government will cap loan rates for builders planning to win construction contracts overseas. The state-run bank will also shoulder the burden of risk on the loans, the ministry said in a report on Wednesday.

Along with assisting the SMEs, diversifying construction companies and exploring new markets are further targets for the international construction business, the government said.

This year marks the 50th anniversary of Korea’s first construction project abroad, an expressway that was built in Thailand.

But the Korean government is not satisfied by the rising figure, as most of the projects were subcontracts, in which Korean builders merely constructed facilities rather than participated in investment or funding.

The government has aimed to turn domestic builders that bid for projects into property developers and investors that control the whole procedure of an overseas construction job, from building, financing, seeking workers, and sharing profits from completed structures in foreign countries.

“Despite Korean companies’ highly skilled construction abilities, they are still lacking in other areas of construction projects, such as engineering,” Yoo said. “Our aim is to help Korean builders grow as developers, so that they can not only build an airport but can also finance it, and manage the whole operation even after it is completed.”

Roughly 47 percent of overseas construction jobs by Korean builders last year were in Middle Eastern countries, government statistics state, where demand for large-scale projects is shrinking amid falling oil prices. The competition for bidding in the region is also becoming tough, with China’s cheaper labor and the highly skilled construction capabilities of developed countries.

The government will therefore fund companies participating in construction projects in emerging markets such as Central and South America or Southeast Asian countries, which are relatively less affected by oil prices.