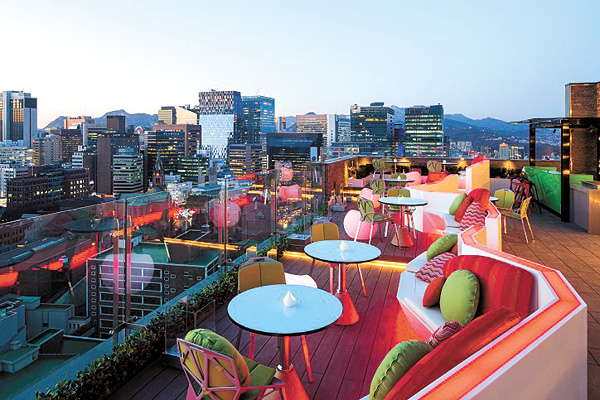 Ibis Styles Ambassador Seoul Myeongdong, a budget hotel that opened on Wednesday, houses a rooftop bar. Provided by the company

Accor-Ambassador Korea announced the launch of a new business hotel line in Myeong-dong, central Seoul, on Wednesday, which targets younger leisure and business travelers looking for affordable but stylish accommodation.

Ibis Styles Ambassador is a budget hotel distinguished from Ibis’s other brands by its trendy interior design. The lobby and rooms in the Myeongdong branch will be decorated with pictures themed around movies or the cinema industry.

Situated between Myeongdong and Chungmuro stations, the property is equipped with 180 guest rooms, a bar and restaurants, including a venue for rooftop dining.

The hospitality group, a French-Korean hotel management venture, opened some of its rooms in January.

All the facilities and rooms are now available.

The hotel caters to business travelers with its meeting rooms in different sizes, which can accommodate up to 80 people and offer large screens, flat-screen TVs and projectors.

The hotel’s recreational facilities include a gym, a hot tub and a sauna with a panoramic view of the city.

Patrick Basset, Chief Operating Officer for Accor Thailand, Vietnam, South Korea, Cambodia, Laos, Myanmar and the Philippines, said that the Ibis Styles brand can live up to the demand for budget hotels in Korea.

“The success of Ibis brands is surprising,” the COO said, “And the hotels have shown an annual growth of 10 percent each year.”

“Accor Group currently operates 16 hotels in Korea,” he said, “But we will have 23 hotels by 2017, introducing new brands including Grand Mercure and Suite Novotel.”

The new hotels will be built in Dongdaemun, eastern Seoul and Busan. Accor-Ambassador Korea is also scheduled to develop and operate the largest hotel complex in the country by 2017. Located in Yongsan, it will house Accor’s four different brands, with 2,000 rooms available for guests.

The group acknowledged that Myeong-dong houses many different types of low-budget hotels, but stressed that Ibis Styles will stand out with its sophisticated design.

The economy brand has to compete with business hotels operated by local chains, as major players Lotte and Shilla expand their low-tier accommodations.