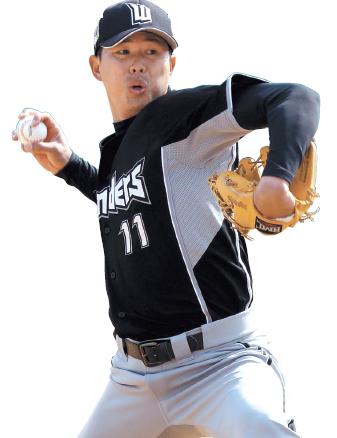 When describing Choi Hyang-nam, there is no better word than journeyman. At the same time, his baseball career has been a continuous challenge.

The 43-year-old pitcher is leaving Korea again, this time to a place many might question: Austria.

According to local media and the club, Choi this week signed with Austria’s Wr. Neustadt Diving Ducks, although details of contract were not released. He will join the semipro club with Hwang Gun-joo a former teammate at the Goyang Wonders, a Korean independent club that was disbanded last year. Hwang, who turns 26 tomorrow, also is a pitcher.

Choi and Hwang will not be the only Koreans on the Diving Ducks, who hired Ha Seung-jun as manager. Last season, Ha, 32, was an interpretor for the Lotte Giants. He played baseball in high school and in the Philippines. 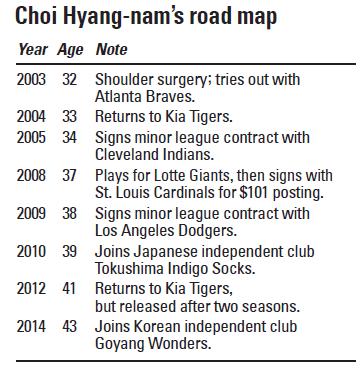 In the Austria Baseball League, there are six teams that play a 20-game schedule. The top two teams qualify for the European Cup. The Diving Ducks will have a welcome ceremony for the new Korean players on March 29.

While working in construction after high school, he was approached by the Hatai Tigers (now the Kia Tigers) and joined the team as a trainee for 5 million won ($4,400) in 1990.

After completing his military duty, he rejoined the Tigers in 1995 and won five games in 19 appearances with a 3.86 ERA. The following year, Choi had one win with a 4.88 ERA in 17 appearances.

During his time with the Tigers, Choi often was mocked as the “Bullpen Sun Dong-yol” as his pitches during games were compared to those of the club’s legendary hurler during practice.

Things started to turn around for Choi when he was traded to the LG Twins in late 1996 and compiled a 28-20 record as a starter over three seasons. However, he was released after hurting his shoulder.

In November 2003, Choi tried out for the Atlanta Braves, but failed to get a contract.

The next year, Choi finally signed a minor league deal with the Cleveland Indians for $100,000. Choi didn’t make it to the majors despite posting an 8-5 record with a 2.37 ERA with the Buffalo Bisons in the Triple-A International League in 2006.

As a closer, Choi was popular with Giants fans because of his aggressive style and quick tempo.

But Choi still had his eye on Major League Baseball, and in November 2008, he signed with the St. Louis Cardinals after the Giants accepted the posting fee of $101.

This made Choi the first Korean to sign with an MLB club through the posting system, though he was released before the season started.

In May, Choi signed a minor league contract with the Los Angeles Dodgers, playing for the Albuquerque Isotopes in Triple-A. He turned in an impressive record of 9-2 with a 2.34 ERA, but again failed to reach the majors.

In 2010, Choi tried out for the Orix Buffaloes of Japan’s Nippon Professional Baseball, eventually catching on with the independent Tokushima Indigo Socks.

While many players might be content to finish their careers in a familiar place, Choi asked the Tigers to release him again after 2013 season so he could again go to the United States.

After failing to find any takers, he joined Korea’s first independent club, the Goyang Wonders in January 2014.

In previous interviews with local media, Choi said what’s important is to set a goal for your life and devote yourself to it.

“The goal of buying a good car ends the moment you buy that car,” he said. “I think the goal in our life should be different than that. If you set a goal and consistently develop yourself, your life will be fun. Even if it isn’t achieved, you will have no regrets.”