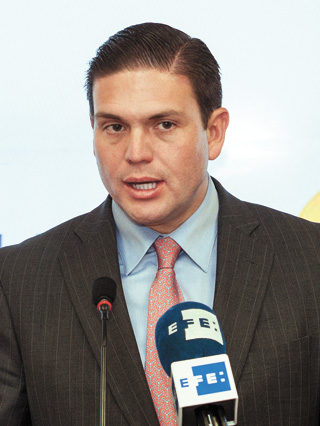 Ending his three-day visit to Seoul on Thursday, Colombian Defense Minister Juan Carlos Pinzon said in a press conference with local media that the trip “provided an opportunity to reconfirm the strong cooperation” between his country and Korea, and that he wishes to further boost bilateral defense ties.

Speaking at the Embassy of Colombia in Jung District, central Seoul, just hours before his flight, Pinzon stressed that the relationship between Korea and the South American country has “never been as strong as it currently is” since the two nations first established diplomatic ties over five decades ago.

“Colombia’s goal is to modernize the military, and we think, as well as hope, that Korea will generously share its high-end techniques and capability with us,” Pinzon said.

“In response, we can provide our knowledge on how to eradicate organized crimes that threaten national security, as we have much experience on that,” he added. “We are ready to share whenever you wish.”

Refraining from detailing what those “organized crimes” were, the defense chief insisted that his country was a “safe place to do business,” citing unsourced numeric data that the crime rate was the lowest last year in 34 years, and the abduction rate the lowest in the last 20 years.

That notable improvement, he added, was due to the enforcement of military and police forces.

Colombia for decades has struggled to dismantle the Revolutionary Armed Forces of Colombia (FARC), a guerilla organization that derives much of its income from drug trafficking, kidnapping and illegal mining.

“President Hugo Chavez is in peace talks with the FARC, and I can assure you that the civil war will come to an end once the discussions successfully wrap up,” he said.

During his stay, Pinzon met his Korean counterpart Han Min-koo on Wednesday and signed a memorandum of understanding on defense cooperation.

Colombia did not purchase any weapons during the trip, he stressed.

In two months, the Colombian Defense Ministry will organize and dispatch a delegation made up of military defense delegates and arms producers, Pinzon said.