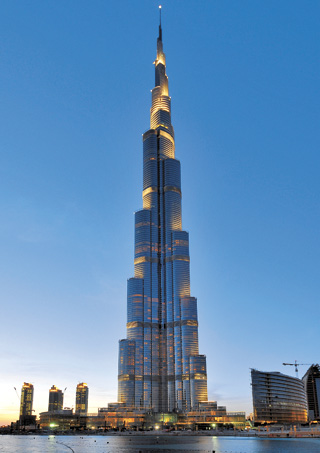 MALAYSIA - The IB Tower in Kuala Lumpur is a 274-meter (899-foot) skyscraper being built by Daewoo Engineering & Construction. The building was designed by U.K. architect Norman Foster.

Since the tower’s unique asymmetrical design results in an uneven distribution of weight, it was crucial for the details to be followed precisely during construction.

“We found design faults by the Malyasian company that managed the construction details after running some three-dimensional simulation programs,” said Lee Ki-sun, a spokesman for Daewoo E&C, which is participating in the IB Tower project. “We later found a method that could fix the faults and applied it after we started building it.”

The company said its high-end technology made it possible to provide a concept drawing of the completed tower to prevent what could have been a disaster.

When Koreans stepped into the overseas construction industry 50 years ago, they focused on basic jobs like roads and housing. In the 21st century, many companies started developing high-end techniques as the industry required more sophisticated technologies.

As a result, Korean companies are winning an increasing number of overseas orders. Last year, Korea was No. 6 in the world, with 708 orders worth $66 billion.

In the early 2000s, Korea share of the overseas construction market was less than 2 percent, compared to 7.8 percent last year, according to ENR, a U.S. media company specializing in engineering and construction news. “As the construction industry has changed to a business that requires high-end techniques, a series of large technology-intensive projects became available,” said Baik Young-sun of the International Contractors Association of Korea.

But construction companies have faced some difficult challenges lately. They were able to develop high-end techniques, but their overall competitiveness in the global market has been threatened by rivals since they focused too much on construction work, which is susceptible to external risks such as labor costs and the price of oil. 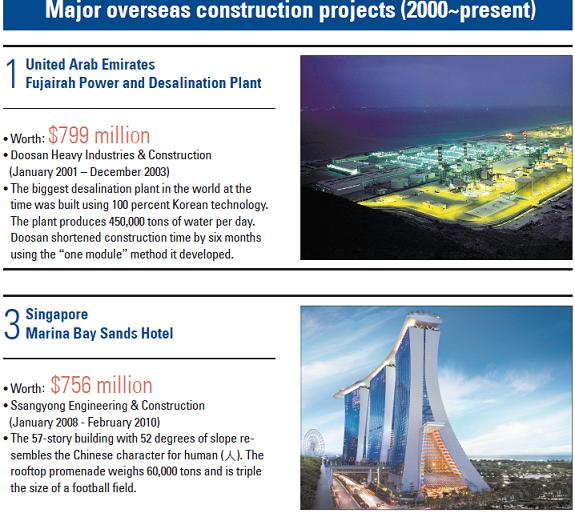 “Newly industrialized nations such as China and India are aggressively challenging Korea in the construction business with relatively low operation costs,” said Choi Min-soo of the Construction Economy Research Institute of Korea. “For the next 50 years, Korean companies need to expand their business to higher-value-added industries, including facility design and construction field control.”

Some say the government needs to create a better business environment. Companies say it is unwieldy to combine knowledge and techniques that are governed by different regulations. “It is hard to hand over knowledge earned in the construction field to people in the design part,” said one construction company executive. “That is why people see so many design changes after a project begins. We have to resolve this problem by improving builders’ fundamental design ability.”


Do what others can’t

In June 2013, Ssangyong E&C received a call from an Indonesian company building a hotel in Malaysia saying the design was too complex. The company wanted to know whether it was possible to build. 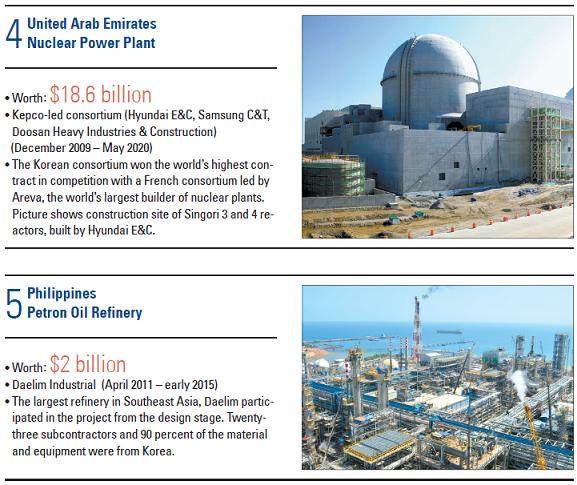 Starting in August that year, Ssangyong carefully reviewed the design and developed a construction method. The Indonesian company then gave the $81 million project to Ssangyong, which was under court receivership at the time.

“Our company was more famous for taking on difficult buildings, particularly overseas,” said Lee Sang-yeob, a Ssangyong executive. Before it received the job from the Indonesian company, Ssangyong had built a hotel on a 52-degree slope in Singapore. Many companies gave up on the project as impossible to build. 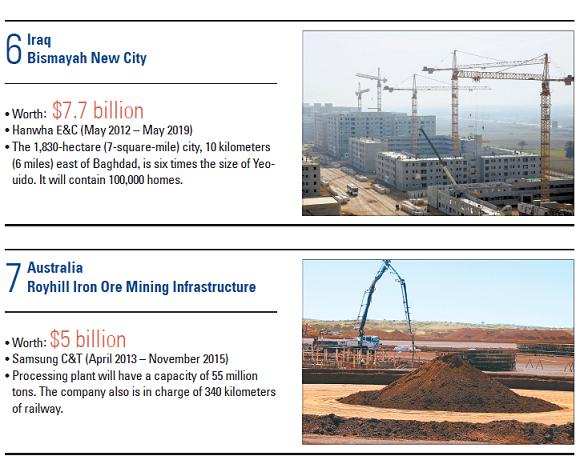 Since Koreans stepped into the overseas construction business, they have been trying hard to develop specialties. Such efforts have paid off. Samsung C&T, which built the Burj Khalifa, the world’s tallest structure, applied techniques used on skyscrapers in Malaysia and Taiwan.

In Turkey, Hyundai E&C and SK E&C are currently building a complex bridge that combines features of cable-stayed and suspension spans that will be the first of its kind. Hanwha E&C, one of the nation’s leaders in urban development, is currently working on the world’s largest new town in Iraq. GS E&C is expanding its business to constructing oil refining and chemical plant facilities, particularly in aromatics. The company has built 10 aromatics plants in five countries, the most by a single company. Daewoo E&C has built four of Malaysia’s five tallest buildings.

Another weapon that Korean companies have is diligent workers and expertise in construction supervision in the field, in which thousands of workers perform hazardous tasks using heavy equipment. Better field control helps meet deadlines and prevent accidents.

In January, SK E&C said it had not had a single accident for 80 million man-hours, equivalent to 1,000 people working 10 hours a day for 21 years and 11 months.

Koreans excel in building skyscrapers taller than 200 meters. The skylines of the United Arab Emirates, Malaysia, the Philippines and India were changed by Korean companies.

The first overseas skyscraper built by Korean companies was the 452-meter Petronas Twin Towers in Malaysia in 1998.

“A skyscraper reflects a nation’s economic power and technology,” said Kim Kyung-jun, vice president of Samsung C&T, who directed the twin tower project. “Korea was late to export skyscraper construction technology because it is a technology-intensive business.”

Petronas Twin Towers consist of two identical buildings. One was jointly built by Samsung and Kukdong E&C and the other by Hazama Corporation of Japan. They were the tallest buildings in the world at the time.

“When we started the project in 1992, the Japanese definitely were better as they had more experience and better technologies,” Kim recalled. “We tried to learn from them and worked overnight so many times.”

Koreans were able to finish the work earlier than Japanese. “I remember that it was early in the morning of March 6 in 1996,” Kim said. “We went to the top of the building and hurrahed with workers. I’ll never forget that feeling.”

Because of the twin tower project, the world recognized that Korean construction companies could offer low-cost labor and high-quality technologies.

“We competed with seven global companies in the 2004 bidding for Burj Khalifa,” said Kim. “But we received the highest scores in the evaluation as the methods we introduced were considered the best and most cost-efficient, and the deadline we offered was the shortest, meaning the company became one of the best in the world in the skyscraper business in only 10 years. Our experience and the technologies we developed in the past decade are something others don’t have.”

In August 2013, ENR ranked Korea sixth in the world for overseas construction capability. Considering that Korea’s first overseas project was the 98-kilometer Pattani-Narathiwat highway in Thailand in 1965, it was a noticeable achievement. But many Korean companies are having a tough time these days.

Recently, many projects in the planning stage or even under way in the Middle East were either delayed or canceled due to low oil prices. That is one of reasons for declining performance of major construction conglomerates such as Hyundai E&C, Daelim Industries and Samsung Engineering since 2013. One construction company with six branches in the Middle East has been losing money as average labor costs have nearly doubled in two years.

Some say that Korean companies need to expand to front-end engineering design and project management, which are considered higher-value-added industries. But that business is currently dominated by global companies, Bechtel of the United States and Technip of France.

In 2010, SK E&C was the first Korean company to win a contract to design an overseas plant, followed by Daewoo E&C, Samsung C&T and Daelim Industries.

Korea also has been chased by newly industrialized nations. China and India have recently beat Koreans with bids that are 30 percent lower thanks to labor costs. In more than 30 instances, Korean companies didn’t even participate in bidding due to such problems, according to the International Contractors Association of Korea.

“Most of the business, excluding building skyscrapers or difficult civil engineering work, is already taken by second movers [such as China and India],” said Choi Jung-seok, a spokesman for the International Contractors Association of Korea. “Chinese companies armed with subsidies from their government, for instance, are aggressively expanding their business territory in the Middle East, where Korea traditionally has been a leader.

Fortunately, the technology level that China and India has is still not better than what Koreans have. For the IB Tower in Malaysia, Chinese companies offered a construction price that was about 20 to 30 percent lower than Daewoo E&C, but Daewoo was selected as the builder because it has better technology and credibility in the business.”

But it looks like Korean companies might not have that advantage for long, since the Chinese are trying to improve their skills and technologies quickly on projects at home.

Industry insiders say Korean companies need to change how they operate in the domestic market first. “The industry is based on the lowest bidding system no matter what kind of project is launched,” said a spokesman for a construction company. “Under such circumstances, companies can’t invest in improving technology.”