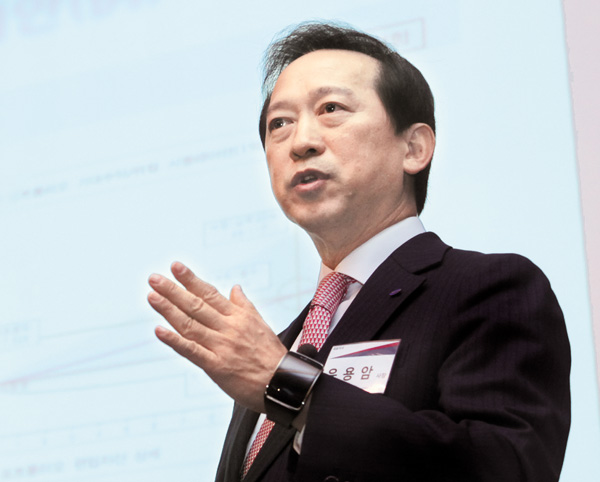 Yoon Yong-am, chief executive officer of Samsung Securities, a leading Korean securities firm, approved of the unexpected cut in the interest rate by the central bank and forecast a good effect on the local stock market.

At a press conference at a hotel in Yeouido on Thursday, Yoon, who took office in December, said the Bank of Korea’s rate cut to an all-time low of 1.75 percent will contribute to economic recovery.

“The rate cut was unexpected and made somewhat late compared to other countries,” Yoon said. “But it’s what the market has been hoping for, so we expect positive effects.”

The new CEO, who previously headed Samsung Asset Management for two years, said both the government and central bank are strongly committed to reviving the economy.

In line with the government’s encouragement of structural reforms, Yoon introduced some reforms he has made at the securities unit of the nation’s top family-run conglomerate.

An appropriate level of median yields for customers is 4 to 5 percent, Yoon said.

The company has also changed its employee assessment system in a way that takes customers’ yields into account, which will make its sales workforce more responsible for selling products and taking care of their customers.

On March 9, the company signed a strategic partnership with CITIC Securities, the largest securities company in China, to cooperate in various businesses, including exchanging market information as well as human resources and selling each other’s products.

China Desk, the company’s operation office in Beijing, will be elevated to a China Center in order to support increasing businesses between the two companies.

“We have built up relations with CITIC Securities for the past 10 years, and now we will strengthen our relations in order to do business together,” Yoon said. “Every year, the CEOs of the two companies will meet and review their performances.”

Samsung Securities also plans on increasing its operations in the United States, Europe, Vietnam, India and Indonesia, the CEO said.