Disney’s ‘Cinderella’ is faithful to tradition

Disney’s ‘Cinderella’ is faithful to tradition 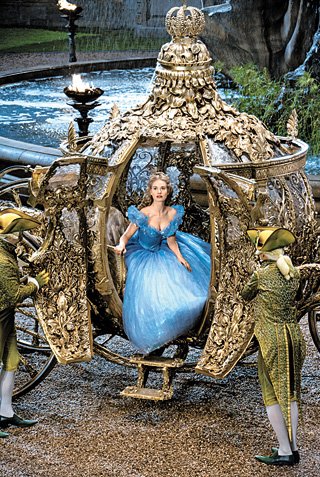 More than half a century has passed since Disney adapted this fairy tale, but the new film still works its magic without that much of a modern twist.

Rather, it sticks sternly to tradition, doing exactly what a fairy tale should - promote fantasy while giving a moral lesson.

Directed by the talented Kenneth Branagh, who made and starred in “Hamlet” (1996), “Cinderella” has Lily James as the titular role and Richard Madden, who played Robb Stark in the popular U.S. drama series “Game of Thrones,” as Prince Charming.

While there was controversy in Korea over James being cast in the iconic Cinderella role, for several reasons including the fact that she is not that well-known here, her innocent face and fragile figure delivered the nuance of a good-natured country girl well.

However, it’s Cate Blanchett’s impeccable turn as the wicked stepmother that stands out the most. Both the 45-year-old’s penetrating gaze and dignified elegance, which the audience will be familiar with from her performances in “The Lord of the Rings” and “The Hobbit,” sucks viewers in every time she appears on the screen.

But Blanchett’s excellent performance is not all there is to her Lady Tremaine character, the widow who moves into Cinderella’s neat suburban house with her two pathetic daughters.

Instead of abruptly introducing her as ultimately evil, the audience is provided with a glimpse of the story behind the character’s menacing intentions.

As a struggling widow and a mother of two, Tremaine needed to find a way to survive. But when she unintentionally witnesses her new husband and Cinderella tearfully talking about how they miss the latter’s mother, her jealousy and desperation spin out of control, resulting in her treating Cinderella like a servant after her father passes away.

The gist of the film remains the same: Have courage and be kind, the last words Cinderella’s mother left her daughter with before dying.

While the message could not be any cornier, the audience is persuaded to believe in it for at least 113 minutes, eventually witnessing Cinderella ending with her Prince Charming, despite coming across obstacles along the way.

It proves that even without the satirical portrayal of society and thought-provoking messages that seem to be a trend in theaters these days, a movie experience can still be worthwhile and enjoyable.

Although Branagh and the film’s writer, Chris Wietz, firmly cling to the original princess tale, the story has been given another twist by having Cinderella and Prince Charming meet coincidentally in the woods before the ball.

If anything is disturbing about romances in Korean films these days it’s that the protagonists fall in love overly quickly without any background information given. It’s always the audience’s job to guess what critical moments have been taken out to make sense of the characters’ ardent confessions of love.

But “Cinderella” avoided this, despite the fact that it would have been understandable if it had stuck to the cliched “love at first sight” plot. Instead, it built enough of a background story so that the audience can easily follow the couple’s emotional development and cheer for their happily ever after.

In a nutshell, the film remains true to its traditional roots, the 1950 animated feature that fulfilled fantasies about fairy tales and finding Prince Charming for young girls, but it just got more vibrant with the help of CG-generated sparkles and colors and ideal performances by very talented actors.

The film opens on March 19.