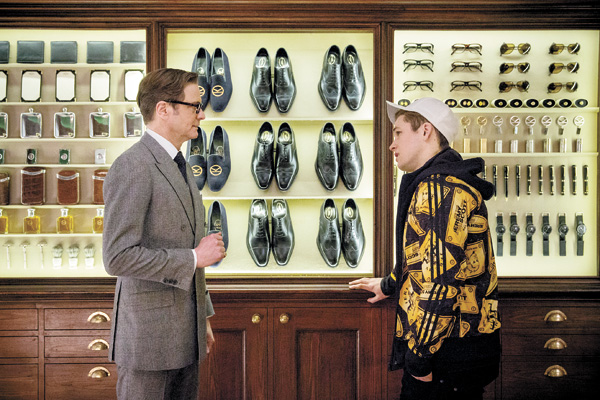 British spy thriller “Kingsman: The Secret Service,” starring Colin Firth, left, and Taron Egerton, is a surprise hit in Korea as the highest-grossing film to open so far at cinemas this year. Provided by the distributor

“Kingsman: The Secret Service” is still holding on to first place at the Korean box office 30 days since it came out, which no one - not even the filmmakers - expected.

Matthew Vaughn’s spy thriller, which opened in local theaters on Feb. 11, has become the most successful movie to debut this year, as well as the most watched R-rated film from overseas in Korea’s cinematic history.

Korea is now the movie’s second-largest market after the United States. 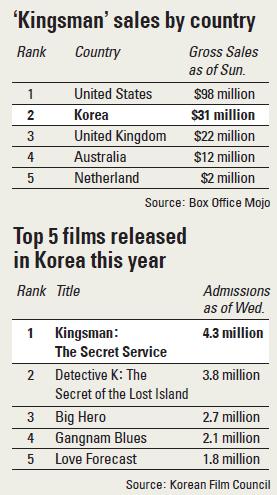 Surprised at the unexpected success, a few members of the film’s cast and creators showed gratitude on their social media accounts about the movie’s popularity.

Actor Taron Egerton, who plays Eggsy, one of the leading actors in “Kingsman,” tweeted on Tuesday, “Thank you Korea for your amazing support of Kingsman movie.”

Mark Millar, the writer of the eponymous comic book the film is based on, tweeted last week that he has added Korea to his Asian tour this year, because he is excited at how well the film is doing here.

“Kingsman: The Secret Service” is an ambitious film from the director of “Kick-Ass” (2010). It intelligently merges humor, action and satire in a lighthearted way. It focuses mainly on Eggsy’s bumpy road to getting accepted into the exclusive spy circle Kingsmen after being picked up by its leading member, Harry (Colin Firth).

A mixture of factors has contributed to the laudable result, but critics say it is down to the movie’s unique story combined with various genres that provide something new to viewers.

The fact that there were not many eligible contenders at the box office also helped “Kingsman” achieve momentum more easily.

From start to finish, the film brims with an idiosyncratic humor, with scenes showing characters ordering McDonalds in a grandiose mansion or a tooth flying out of a gangster’s face in slow motion.

This unexpected freshness was enough for it to gain impetus from word of mouth.

Film critic Shim Young-sup said the combination of an action and splatter movie, a horror genre of sorts, has never been attempted before in a spy film.

“The mass-slaughter scene is depicted in a lighthearted and jolly way,” she said. “It is rhythmical and humorous. People can feel a thrill from scenes like this.”

Colin Firth’s stylish demonstrations in the action scenes, which were a first for the 54-year-old actor, provide another kind of enjoyment for the female audience.

Support for the underdog

In the film, Eggsy is a kid raised in East London by his single mother and violent step-dad.

When he joins the trainee circle, he certainly doesn’t stand out among the masculine and intelligent boys raised in wealthy families. He isn’t expected to succeed.

According to statistics from CGV, the largest theater chain in Korea, more than 50 percent of the tickets sold were bought by people in their 20s.

This suggests that Korean youths, who are struggling for acknowledgement at school or work, feel sympathy for the underdog.

“The protagonist, Eggsy, was a failed child who lost his dream,” said film critic Jung Ji-wook.

“Having a non-mainstream character in the title role appealed to the local young audience.”

Shim also pointed out that the coming-of-age story appealed to the 20-something audience in Korea.

A lack of alternatives

There is also a bit of luck factored into the “Kingsman” success story.

When the film was released in February, which included the five-day Lunar New Year holiday, there were not that many strong contenders in the box office.

This enabled the movie to debut in second place after local comedy flick “Detective K: Secret of the Lost Island.”

The fact that the total number of moviegoers in February plunged by 10.2 percent compared with the same period last year proves that the month was a slow one for the film business.

And when the much-anticipated “Empire of Lust” and “Fifty Shades of Grey” failed to win the hearts of the local audience, there were no features that could put up a fight against “Kingsman” in March, either.

It remains to be seen whether the film will stay in the upper tier of the box office in the coming weeks with a string of new releases, including crime thriller “The Deal” and Oscar-nominated “Whiplash,” joining the competition.

However, as a group of ardent fans willing to attend theaters and re-watch the film has already been formed, there might be a rosy picture for “Kingsman” awhile longer.