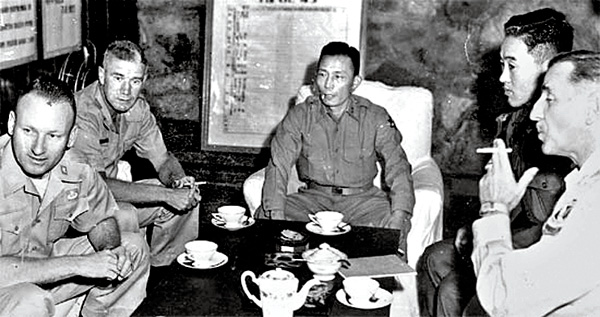 Park Chung Hee, a major general in the Army, holds a meeting with American military officials at the Army’s 6th district division office in 1959. Provided by Kim Jong-pil

This is the sixth in a series of articles on the life and times of Kim Jong-pil, a two-time prime minister, based on extensive interviews with the 89-year-old. This installment deals with the period after the April 16 revolution in 1960 that took down the Syngman Rhee government, Korea’s first elected government. Kim said incompetence and weak leadership by the Chang Myon administration deepened his belief that a coup, which he described as revolution, was needed.

When young people took to the streets for the April 16 revolution, I was a 34-year-old lieutenant colonel. And when the public called for the ouster of Korea’s first government led by Syngman Rhee, I agreed with the spirit of the movement.

The April 16 Revolution, however, failed to deliver because of the incompetence and lack of leadership of the Chang Myon administration, which took power following the collapse of the Rhee government.

But the young men’s call for change provided the momentum that later led to that turn of history. And while young men and women longed for reform, a similar sense of need for change was increasingly felt within the military.

Before and after the April 16 revolution, my office at the Army headquarters in Seoul became a place of heated discussions among young military officers on how to bring far-reaching changes to the military. Many agreed that ranking military officials responsible for the rigged March 15 general elections in 1960, which angered so many and led to nationwide street protests, should resign from their positions.

Besides myself, core members of those discussions were seven fellow military academy graduates, including Kim Hyung-wook, who later became the head of the country’s main spy agency.

Former President Park Chung Hee also concurred on the need to replace corrupt military officials as well as those involved in the rigged election. Park, who was then martial law commander for the city of Busan, sent a letter to Army chief of staff Song Yeo-chan on May 2, 1960, about three weeks after the Rhee government crumbled.

In the letter, Park suggested that Song should resign to take responsibility for the military’s intervention in the March 15 election. Song was enraged at Park.

But actually, Song had no reason to balk. It was no secret that the military meddled in the general election and Song, a four-star general, bragged about the military’s role in clinching electoral victory for the Rhee government. Right after the rigged March 15 election, I vividly remember Song saying that the “military had done its part 110 percent in the election.”

After I heard about Park’s letter to Song, I began circulating petitions among fellow military officers demanding that ranking officials resign to take responsibility, especially Army chief of staff Song. But not long after I began my initiative for military reform, myself and five fellow officers who signed the petitions were arrested by the military’s counterintelligence bureau. We faced charges of conspiring to rebel against the state, a serious crime that could put you on death row if convicted.

But I was not worried at all because I knew the public and the rank-and-file in the military were on our side and supported our cause.

On May 19, a few days after my arrest, chief of staff Song paid a visit to see me in prison. He asked me why I called for him to step down.

I said, “The country is now on the verge of going through a transformation to become a better place by ridding itself of [political and social] ills laid bare by the fabricated March 15 elections. You need to step down to bear responsibility. Or I will publicly defend myself in a military court.”

To my surprise, Song said he was thinking about resigning, adding that he needed about two days to think about it. But I insisted he needed to resign right away.

And he did as was told the next day.

Looking back, I wonder how I, a mere lieutenant colonel, had the courage to make such a demand to a four-star general. But I am sure that such courage is what is required when one tries to change the world.

A few days later I was released from military prison.

To this day I recall a conversation I had with Park Chung Hee on June 9, 1960. I was sitting next to him in a military jeep on the way to his house for dinner. Park said he and I should work together in purging corrupt military officials.

Nodding, I whispered into his ear, “If we can’t make that happen, then we should resort to revolution.”

I believe that moment awakened in me the possibility of revolution, although it would be eight months before Park and I sat down again to indulge in concrete plans for action.

In 1960, I was filled with a passion for reforming the military. And I was clearly aware that to realize such a sweeping change, support from the top of the chain of command - the defense minister - was an absolute must. Therefore, I figured it all came down to who would be appointed by the Chang Myon administration to take the military’s highest position.

But the Chang government’s appointments, made soon after my meeting with Park in June, showed that the government did not really care about taking on corrupt military officials.