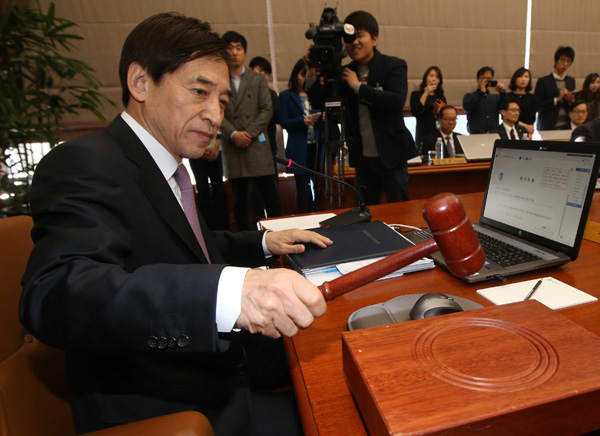 The quarter percentage point cut was the first interest rate cut by the Bank of Korea in five months. Analysts had predicted that the central bank would stand pat amid concerns that lower borrowing costs could accelerate growth in household debt.

But the central bank said South Korea's economic growth and inflation this year will be lower than expected. There are also concerns that South Korea could suffer falling prices, also known as deflation, which can cause prolonged economic stagnation as people and companies delay investment and spending.

``We took into consideration that it was necessary to revive recovery momentum,'' BOK Governor Lee Ju-yeol told a press conference.

In January, the central bank revised its 2015 growth outlook to 3.4 percent from 3.9 percent and downgraded its inflation projection to 1.9 percent from 2.4 percent. The bank will release revised economic forecasts in April.

Japan has grappled with a deflationary slump for years and is carrying out an unprecedented stimulus effort to create inflation. Europe is on the verge of deflation and has launched its own massive program to boost the money supply. Central banks in countries such as Australia and India have cut interest rates recently to boost sluggish growth.

The U.S. Federal Reserve, meanwhile, is heading in the opposite direction. It is expected to raise interest rates this year as the U.S. economic recovery gains momentum.