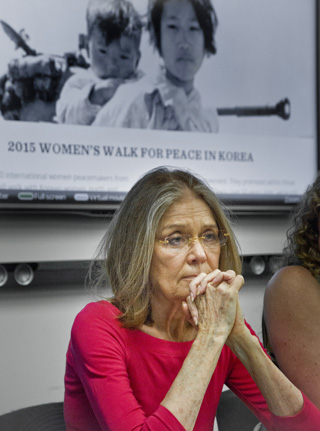 Organizer Gloria Steinem, honorary co-chair of the group called WomenCrossDMZ, at a United Nations press conference outlining plans for a walk across the demilitarized zone between North and South Korea on Wednesday. [AP/NEWSIS]

Prominent international female activists including writer Gloria Steinem announced a plan to march across the demilitarized zone (DMZ) between North and South Korea in May to call for reunification.

The organizers said they hope to cross the Korean border from North to South on May 24, which is the International Women’s Day for Peace and Disarmament, at a press conference at the United Nations headquarters in New York on Wednesday.

Around 30 women from a dozen countries, including two Nobel Peace Prize laureates, professors, former diplomats and leaders of religious and rights organizations, plan to participate in the peaceful walk, according to its organizer, WomenCrossDMZ.

Steinem, a 80-year-old gender equality activist and bestselling author, is an honorary co-chair of the group along with Mairead Maguire, a Nobel Peace Prize laureate for her work on the ethnic and political conflict in Northern Ireland.

A champion of women’s rights since the 1960s, Steinem said, “It’s hard to imagine any more physical symbol of the insanity of dividing human beings,” in regards to the heavily fortified demilitarized zone.

Steinem, who has visited South Korea several times as well as the DMZ, said that walking across the inter-Korean border will have “huge importance” to her personally.

Several Korean-Americans are also participating in the Women’s Walk for Peace in Korea movement including Vana Kim Hansen, a member of the organizing committee and peace activist with a doctorate in education from Harvard, who was a refugee during the Korean War (1950-53).

This walk will also coincide with the 70th anniversary of the division of the Korean Peninsula.

Another coordinator of the march, Korean-American columnist Christine Ahn, head of the group Women Demilitarize the Zone, said to reporters, “The DMZ can and must be crossed to begin to heal the divided Korean Peninsula.”

They aim to mobilize North and South Korean women to join in the two-mile walk across the DMZ and hold international peace symposiums in Seoul and Pyongyang.

The organizers said they are seeking the support of the United Nations and both Korean governments.

A North Korean diplomat to the United Nations told reporters that the proposal is under discussion in Pyongyang.

In Seoul, a Ministry of Unification official said to reporters on Thursday, “We cannot grant approval [for crossing the border] through the Inter-Korean Exchange and Cooperation Act in the case where parties involved are not citizens of North or South Korea .?.?. To cross the DMZ, [foreign citizens] will have to seek approval of the United Nations Command.”

Also, when a foreign national crosses the border from the South to North, or vice versa, they have to pass South Korean government customs procedures.

The official said that once the government is informed of the group’s plans, it will consult with the Justice Ministry and Foreign Affairs Ministry to discuss technicalities.

The official added that any equipment and supplies that cross the border will have to gain government approval and “when a request is submitted to the Unification Ministry, we will review it for approval.”