One of Seoul’s busiest roads will get narrower

One of Seoul’s busiest roads will get narrower 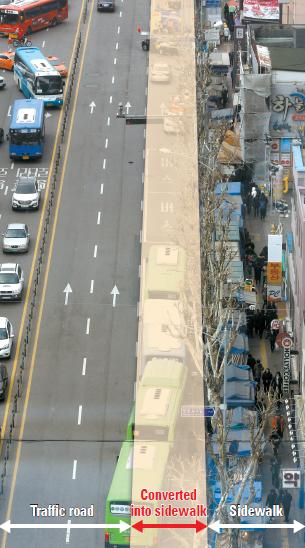 Yeongjungno, located next to Yeongdeungpo Station, western Seoul, will be narrowed in an attempt to ease traffic jams. By Kang Jung-hyun

Yeongjungno, the road in front of Yeongdeungpo Station, experiences some of the worst traffic jams in the capital.

To improve the situation, the city is going to make it narrower, not widen it.

“People might think turning traffic lanes into sidewalks will only worsen traffic jams, but the reality can be different,” said the head of Yeongdeungpo District Office Jo Gil-hyeong on Wednesday. “It has been proven many times in foreign countries that [road expansion] only attracts more cars.”

The district office has made the decision to scale down the road earlier this year and is expected to finish its basic design by June. 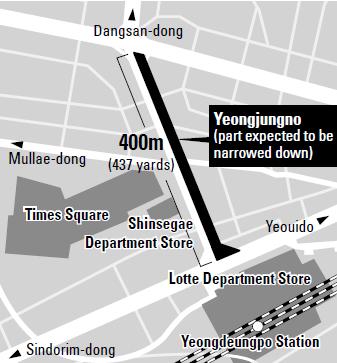 The local authority cites Braess’s Paradox as a justification, a theory by the German mathematician Dietrich Braess. It says that adding capacity to a road network can reduce traffic flow because more drivers will choose to use it. Conversely, narrowing a street could lead to smoother traffic flows.

“Due to a rapid increase in the volume of traffic, it has become impossible to solve congestion only with social overhead capital,” said Je Hae-seong, president of the Architecture and Urban Research Institute. “This is also the reason why authorities prefer to push cars out of downtown areas and make beltways instead.”

Yeongjungno was chosen as the country’s first deliberate application of Braess’s Paradox because it gets massive amounts of traffic day and night. It has cars going in and out of nearby department stores, shopping malls and also a beltway located west of the area. Cars going to and from cities southwest of the capital need to pass the area as well.

But Korea has experienced Braess’s Paradox before. Traffic actually improved in central Seoul when a highway was removed in the early 2000s for the restoration of Cheonggyecheon.

Yeongjungno was completely clogged when Si Yeon-wu, 31, visited the area on March 1. She could barely push her 5-month-old son in his stroller because of the street vendors lined up along the narrow sidewalk.

The crowding got even worse at bus stops.

“I had to step down into the traffic lane when I was passing by the bus stop,” Si said.

On a scale of A to F, the quality of pedestrian service in the area is considered a grade D, according to the district.

The district believes turning one lane into an expanded sidewalk will increase the sidewalk width from five to seven meters (16 to 23 feet), increasing the quality of pedestrian service to grade B.

“We are also considering offering financial support by including Yeongjungno into our plan to promote a better walking environment,” said Kim Hyeon-sik, an official of the City Transportation Headquarters.

But there are some hurdles to overcome for the district office, too. The police, who are in charge of traffic, are taking a negative attitude.

“We hope the district office does something about the street vendors before they consider narrowing the road,” said a police officer from the Yeongdeungpo Police Precinct.

Street vendors are not welcoming the decision either. A vendor named Yang, 49, claimed “the local government is only trying to kick street vendors out of the street.”

Analysts say the district office needs to persuade everyone who will be affected by the change.

“It took an average of six to eight years even in advanced countries to shrink roads,” said Jeong Seok, an urban planning and design professor at the University of Seoul. “Since authorities in other countries needed time to realize their plans, the district office needs a long-term vision.”