Museum for action figures springs up

Museum for action figures springs up

Temporary exhibition “My Toy” introduces classic action figures. Through a kiosk installed underneath the glass case (inset), information about the action figures are displayed. By Jeon Ho-seong

Even its exterior will enchant fans with its LED panels that create and project illusions of action figures on three sides of the building.

While many people still consider these items purely as plastic toys or an expensive hobby for some, action figures have come a long way in Korea, with dedicated annual fairs springing up across the nation.

The JoongAng Sunday, an affiliate of the Korea JoongAng Daily, recently visited the museum and talked to its co-presidents.

Yu Byeong-su and Lim Jung-hun’s love for action figures dates back to 40 years ago, when they were children studying at the same elementary school.

“My father used to bring me action figures whenever he returned from a business trip to Japan,” said Lim.

“Every kid loves toys. But some of them forget them after growing up, while others retain memories about them even after many years.”

About 800 artifacts are on display across Figure Museum W’s eight floors.

The large collection includes limited-edition pieces with jaw-dropping price tags, while others are inexpensive and are available from ordinary shops.

Yu and Lim tried to find a happy medium between appealing to devout fans and ordinary people when they worked on the layout of the venue.

Even though those with an interest in action figures will have a rich source of information about many of the items on display, the museum’s creators recognized the need for additional explanations for the average person.

“They are difficult for ordinary people to understand,” said Lim, explaining that not everyone knows precisely why each action figure has been an important milestone in the history of the industry. 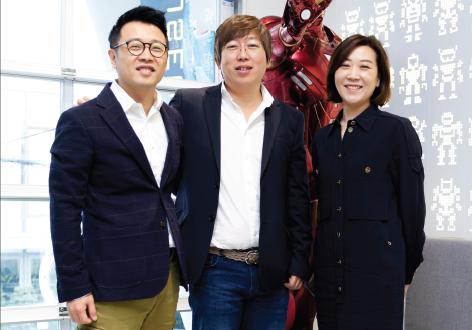 From left: Lim Jung-hun and Yu Byeong-su, the co-presidents of the museum, along with the museum director, Yang Yu-jeong.

For this reason, the third and fourth floors are good starting points for the uninitiated to explore.

A permanent exhibition is displayed across these areas, chronicling major action figures, starting with Astro Boy, which was manufactured in 1951 and ends with Evangelion in 1995.

The museum has a wide collection and has secured a large-scale storage space in Seongsu-dong, eastern Seoul, but has had a hard time sourcing a vast collection of Astro Boy items, which is much older than other action figures.

“We explained the purpose of this museum to actor Cho Min-ki, who is known as an Astro Boy maniac, and he willingly lent some of his collection to us,” said Yu.

“We plan to hold exhibitions in which people can enjoy various pieces from individual collectors in the near future,” he added.

The temporary display “My Toy,” which is available to see across the fifth and six floors, was also devised to introduce classic action figures to both aficionados and ordinary people. 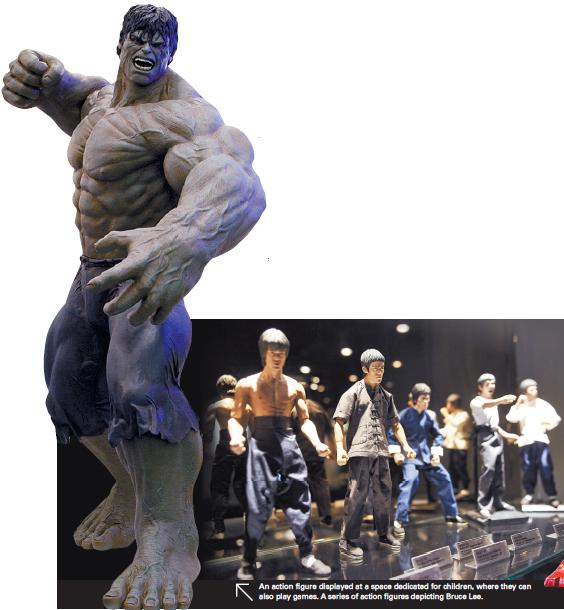 An action figure displayed at a space dedicated for children, where they can also play games. A series of action figures depicting Bruce Lee.

Yu and Lim said they planned the exhibition by pretending that they were introducing old friends to the museum.

About 40 action figures are showcased and an information kiosk is installed underneath the glass cases so that people can find out detailed information about each exhibit by touching the screens.

Iron Man, Yu’s hero, and Gundam, an old friend of Lim, along with various other superheroes, are neatly placed inside glass cases.

Of all the items in the collection, the most outstanding is Gundam RX-93V, produced by a famed action figure manufacturer. 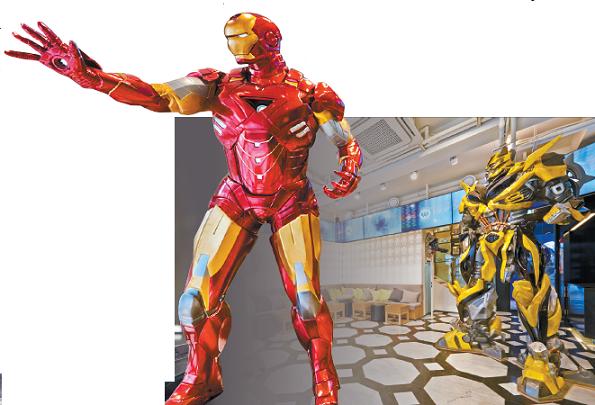 Life-sized Iron Man and Bumblebee greet visitors at the entrance of the museum.

“Action figures are pretty much the same as paintings. They are not that expensive at the beginning,” said Yu.

“You could buy them at relatively lower prices when they are first released in the market, but the price goes up as time goes by.”

According to Yu, the cost soars depending on a few factors such as which company produced the item and whether it is limited edition or not.

Figure Museum W was born out of Lim and Yu’s passion for action figures, but they also wanted to create “a sacred place full of action figures for both maniacs and ordinary people.”

“We have a few popular characters like Pororo the Little Penguin, but they seem like a flash in the pan,” said Lim.

Yang Yu-jeong, 44, the director of the museum, said that Korea has the potential to become the center of the character business.

“If Japan has manga, we have webtoons,” she said.

“In that sense, a place where families can have fun together is very important. With original action figures, which have artistic and technical aspects, fathers could share their love for action figures with their children.”

In the hopes of making the museum a family-friendly place, a cafe and a figure shop are open to any visitors.

At the end of the interview, Yu and Lim explained the reason why they put W at the end of the museum’s title. The meaning will vary depending on the opinion of the people who visit the venue.

“It could be wow or wonderful,” they said.

Ticket for an adult is 15,000 won and 12,000 won for a child, but people who buy tickets through online can get discount. Children who are younger than 36 months are eligible for free entrance.

The nearest subway station to the museum is Apgujeong Rodeo Station (Bundang line), exit 4. Using public transportation is highly recommended because the building has no parking spaces.