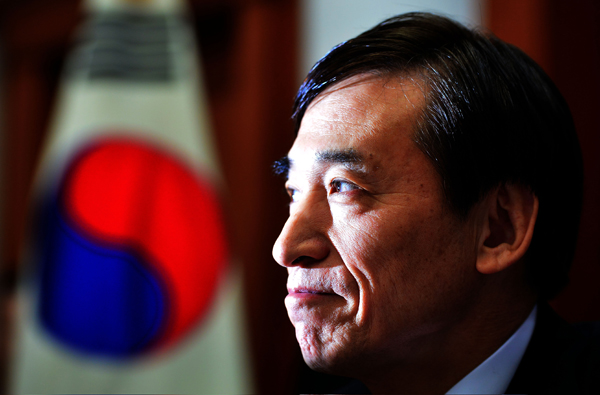 The historic-low benchmark rate cut to 1.75 percent is expected to boost Korea’s real estate market, while simultaneously raising concerns about the possibility of a further increase in household debt and drop in jeonse rentals, under the government’s eased mortgage regulations.

With the lowering of the rate from 2 to 1.75 percent, bank industry observers say the interest rate on mortgages is expected to drop from an average of 3.34 percent to 3.2 percent.

Although the drop in loan interest is seen as easing the financial burden on homebuyers and boosting the housing market, concerns are mounting over how the government would handle an increase in household debt, which has been steadily growing since Finance Minister Choi Kyung-hwan loosened real estate and loan regulations in August.

As of the fourth quarter of 2014, Korea’s household debt, including credit cards, totaled 1,089 trillion won ($962 billion), according to the most recent Bank of Korea statistics, with mortgages accounting for about 462 trillion won. 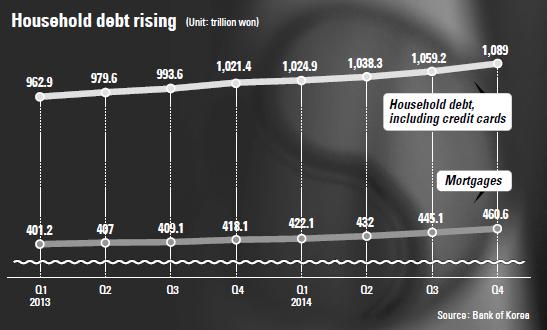 Hours after the central bank announced it would cut the benchmark rate on Thursday, the Ministry of Strategy and Finance released a statement in cooperation with several key government organizations announcing the launch of a “special committee on the management of household debt.” It said the committee will focus on managing household debt and strengthening monitoring of borrowers’ qualifications.

“The current level of household debt is still manageable for us,” said Kim Jin-myeong, a Finance Ministry official who heads the committee. “The problem is how to continue to manage it and prevent it from posing a grave threat to the financial industry.”

“The matter of debt will not be a problem if people have the ability to pay it back,” said an official of the Financial Supervisory Service. “We will focus on effectively managing the financial soundness of borrowers, paying particular attention to those with loans secured by commercial property or land from savings banks.”

However, concerns linger over the possibility of the BOK raising the benchmark rate, as the Korean central bank is expected to face pressure to increase overall rates to prevent an exodus of foreign funds if the U.S. Federal Reserve increases its key rate later this year.

In an effort to prevent a skyrocketing burden on borrowers in the event of a rate increase, the Financial Services Commission announced in January it would ask banks to promote fixed-rate loans of 2.6 percent for 20 years.

But the request soon stirred controversy because of its eligibility requirements.

First, the loan is not available for people who already have a mortgage and have started to pay back the principal.

Second, it also excluded those who refinanced their debt to 3 percent loans when the government cut interest rates twice last year.

Third, it only accepts borrowers who can pay back the principal and the interest from the beginning.

For banks, which already feel burden by the BOK’s lowest-ever rate, the introduction of fixed-rate loans is not welcome news.

“If the central bank raises base rates later, all of the burden for the 2.6 percent loans would be shouldered by us,” said a senior bank official, on the condition of anonymity. “The fixed-rate loan in and of itself does not help the profitability of banks. But we are forced to follow the directive of the government.”

Despite concerns over household debt, the low interest rate is expected to further boost Korea’s housing market, which has been showing signs of rebounding under Choi’s ambitious policy of deregulation, notably the easing of requirements to obtain mortgages.

Still, the lowering of interest rates is expected to continue to encourage landlords to offer their property for rent under the monthly payment system rather than on jeonse contracts, whose lump sum deposits would not earn much of a return from banks.

With the Bank of Korea’s two cuts in the benchmark rate last year, the amount required for jeonse deposits skyrocketed. As a result, there was a falling number of jeonse houses and more monthly rental properties.

According to the Ministry of Land, Infrastructure and Transport, average jeonse prices reached 87 percent of the average cost of buying property in Seoul, Incheon and Gyeonggi in February.

The share of monthly rentals in February increased to 43.5 percent of the market in January from 39 percent in October, the Land Ministry statistics said.

“The lowering of the base rate will accelerate the increase of monthly payment rentals in real estate market,” said Kim Eun-jin, a real estate analyst at r114.com. “For tenants, it will become more difficult to find a jeonse rental house with an affordable deposit, and possibly some of them will consider buying houses rather than living in expensive jeonse rentals.”