68 companies get down to business

68 companies get down to business 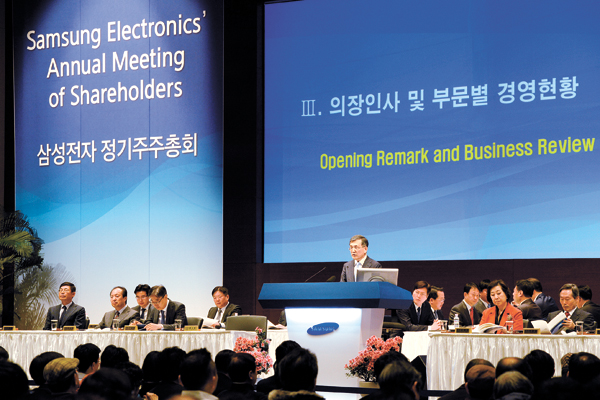 Sixty-eight companies, including Samsung Electronics and Hyundai Motor, had shareholders meetings Friday and a flurry of itineraries was approved.

Contrary to expectations, however, no issue involving succession was raised at the meeting attended by about 400 shareholders and institutional investors. The company discussed its outcome for last year - 206 trillion won ($182.5 billion) in revenue and 25 trillion won in operating profit - and reappointed a few internal and outside directors.

Kwon Oh-hyun, chief executive officer and vice chairman of Samsung Electronics, was reappointed as an internal director for another three years.

Jay Y. Lee’s name again was not put on the list of board of directors. Directors make critical management decisions and take responsibility for company affairs, and many heirs apparent avoid the burden.

“The unpredictable situation with the global economy is forecast to persist this year and competition is seen as intensifying,” said Kwon in the opening address. “But we will do our best to improve shareholder value by effectively coping with the situation based on the spirit of a challenge that transforms crisis into opportunity.”

The head of device solutions overseeing memory, system LSI and LED at the tech bellwether vowed to proceed with new businesses related to the Internet of Things (IoT) such as smart health and the smart home, and to concentrate on premium products and technological leadership.

Heads of other divisions, including mobile and consumer electronics, also delivered brief speeches and took questions from shareholders, which was unprecedented.

Samsung insiders say the change was made under orders from Jay Y. Lee, who stressed building a “tighter relationship” with shareholders.

Some minority shareholders took issue with the company’s financial transparency and dividends for smaller investors. One of them complained he had hard time understanding financial statements within such a short time period and the cash flow chart lacked details.

Kwon responded that Samsung believes focusing on “long-term growth” is better than handing out hefty dividends.

Samsung Electronics announced in a regulatory filing Jan. 29 it set a dividend of 19,500 won per share to be paid April 14. That is an increase of 40 percent from a year ago.

Shares of Samsung Electronics ended 0.7 percent higher to close at 1,457,000 won on Friday.

All four agendas were passed at the shareholders meeting of No. 1 automaker Hyundai Motor.

One of the biggest concerns at the meeting was whether shareholders would reassign Yoon Gap-han, president and CEO of Hyundai Motor, as executive director. Some shareholders, including the National Pension Service, which owns an 8 percent stake, stated prior to the meeting that they oppose Yoon, saying he is responsible for overpaying for the Korea Electric Power Corporation (Kepco) site in Samseong-dong, southern Seoul.

But most shareholders agreed Yoon should stay in the job for three more years.

Foreign investors who saw the company’s share value decrease the past few months asked the company to establish a board of directors governance committee to protect shareholder rights and interests.

The two Chungs did not attend the meeting.

For top steelmaker Posco, the biggest issue at its shareholders meeting was whether to appoint Bahk Byung-won, chairman of the Korea Employers Federation, as a new outside director.

Some minor shareholders claimed there was a chance his loyalty might be divided as he is still president of Korea Asset Management Corporation and a candidate for outside director at Doosan Infracore.

But the meeting eventually approved his appointment.

Posco Chairman Kwon Oh-joon told the audience the struggling steel industry will not recover soon, but the company will try to improve its profitability with better marketing strategies.

When a shareholder asked Kwon about this take on the carbon credit trading system, the Posco CEO expressed concern about the government’s push on the policy that puts extra tax burdens on not just Posco, but the overall steel industry.

“We, the steelmakers, are largely perplexed by the government’s approach of pushing the carbon credit trading system, which is opposite of the global trend,” Kwon said after the shareholders’ meeting, adding that an increasing number of countries tend to eliminate their existing domestic carbon trading policies.

Despite not disclosing Posco’s carbon emission quota, Kwon emphasized the policy will have a limited impact on Posco’s management performance this year as the company already has plenty of carbon credits accumulated over past few years, which the company can sell in the market.

“Also, as the government is expected to apply even stronger carbon emission standards on manufacturers, Posco will keep striving to boost profit by continuing corporate restructuring and investing on R&D projects for advanced steel and new materials technologies,” Kwon added.

Each company was assigned a three-year carbon emission quota on Dec. 1. If a business exceeds its quota, it must buy the credits from another company.