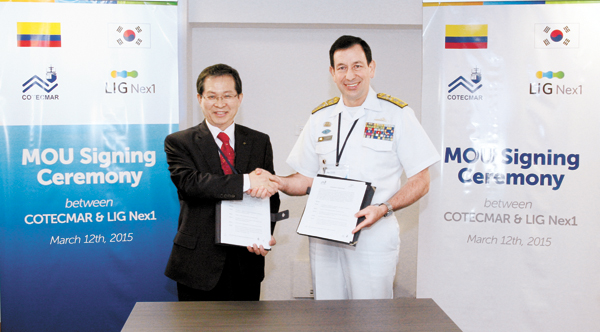 CEO Lee Hyo-koo of LIG Nex1 and Jorge Carreno Moreno, president of Cotecmar, sign a memorandum of understanding Friday in Colombia. Provided by the company

The Korean company will supply technical solutions and sensors for the patrol vessels, according to a statement released by the company.

The signing ceremony was held in Cartagena by Jorge E. Carreno Moreno, president of Cotecmar, and Lee Hyo-koo, CEO of LIG Nex1.

“Exports are the key to success for domestic defense companies,” said Lee. “As demand for defense systems is on the rise in the Central and South America, we are trying to bolster our presence in the region with a focus on Colombia.

“This MOU will help strengthen relations between the two countries, as well.”

LIG Nex1, an affiliate of LG Group, has sought to expand its presence in Colombia through different events.

In October, the company participated in the three-day Expodefensa International Defense and Security Exhibition in Bogota.