Lotte aims to prove it is serious about safety

Lotte aims to prove it is serious about safety 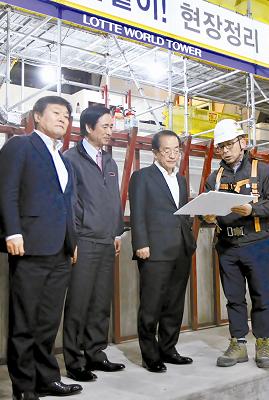 Executives of Lotte Group are going all out to show that the troubled Lotte World Mall in Jamsil District, southern Seoul, is free from danger in a desperate effort to diffuse the controversy over the safety lapses haunting the complex since it opened in October.

Lee In-won, vice chairman of Lotte Group, participated in a safety inspection ahead of the spring season, Lotte Corporation, a company in charge of constructing the mall that houses stores, an aquarium and movie theaters, said on Friday.

The vice chairman currently serves as chief of a safety committee dedicated to managing the huge cultural and shopping complex.

Lee checked the conditions of water pipes and other non-operating equipment.

He also inspected parts of the ground in the mall’s surrounding region. Last year, Lotte was blamed for causing large sink holes found in Jamsil, though the Seoul city government denied any direct link between those issues and the company.

Lotte Corporation said it has installed more safety nets to prevent parts of the building from falling on visitors. At the end of October, a 46-year-old employee of a Lotte subcontractor was cut when a piece of metal fell on him from the third floor.

Before the incident, a series of cracks were found in several places at Lotte World Mall - including a parking lot, aquarium and a restaurant - fueling the safety concerns.

Shin Dong-bin, chairman of Lotte, is also endeavoring to promote the building’s safety. He has invited some 50 foreign delegates and prominent figures from different fields to visit the complex since October.

The chairman gave the guests a tour and explained what the group is doing to prevent danger.

“The chairman cares a lot about the safety of Lotte World Mall,” said a representative of Lotte Group.

“He warned officials that he will check safety without any notice once a week.”

The launch of the committee in January was part of the group’s efforts to respond to the safety issues.

Seasoned executives are involved in the committee, including CEO of Lotte Corporation Noh Byung-yong.

It is divided into three parts - monitoring, safety inspections and communications teams.

The move is intended to sooth the concerns of the government, as well as the public.