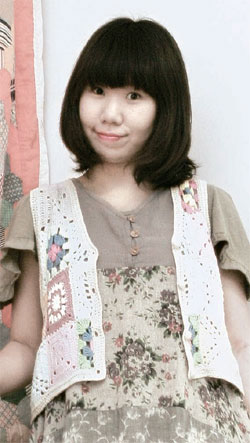 Gu Gyeong-seon spends her days working toward accomplishing her goals and preparing for the day when she will lose her sight. Provided by Wisdom House

Gu Gyeong-seon lost her hearing when she was just 2 years old. And after living in silence for decades, the illustrator, now 31, was diagnosed just two years ago with retinitis pigmentosa, a condition that will eventually cause her to go blind.

But, “Despite losing my hearing and sight, I can still smell,” she wrote in an essay book published in February. “There are scents that make me feel good; I still have many senses to feel. So I think they can keep me happy in the future.”

Nevertheless, the situation has often frustrated Gu since her diagnosis, and she found herself wondering why her life was so unfair.

So in 2008, she created a rabbit character named Benny. As a designer, Gu creates browser skins, background images account holders can use on their personal webpages on the social networking site Cyworld. 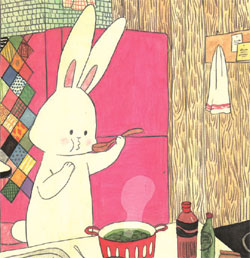 Since then, Benny has become her avatar. The character has giant ears so that he can hear every sound. She, on the other hand, has eyes to see, a nose to smell and hands to touch.

Still, she had to face the reality that one day she would no longer have her sight anymore.

At the height of her anger after her diagnosis, Gu went to the Philippines for missionary work, and a boy whom she met there changed her perspective.

Gu said in an interview conducted over the messaging application KakaoTalk that he had lost everything in Typhoon Haiyan.

“The boy wanted to be a photographer who travels around the world,” Gu said.

So the illustrator drew a picture of a photographer for him. His reaction, she said, helped her to finally let go of the anger she was carrying around and gave her an idea.

“There are many things still left for me,” she said. “It felt like seeing a beam of light.”

Since then, Gu has been checking off her bucket list - publishing a book was just one goal.

But perhaps her most memorable achievement was serving miyeok guk, sea mustard soup, to her mother. As a child, Gu’s mother was relentlessly supportive of her daughter. She didn’t want her to be alone, and taught her how to speak and introduced her daughter to new friends.

On the day she served her miyeok guk, Gu’s mother burst into tears and prayed that her daughter be saved from going blind.

Gu is preparing for her oncoming blindness by learning how to read Braille and walking with a cane.

Her view now is like looking through a cylinder 8.8 centimeters (3.5 inches) in diameter - with tunnel vision, she cannot see objects in her periphery. And Gu can barely see in the dark.

“I often walk around in the evenings to practice using a cane,” she said, “because I’m still nervous to walk closing my eyes.”

At times, Gu fears she may go blind tomorrow, though she tries not to avoid that concern. Often spending her time sleeping or staring out the window, Gu has accepted her situation. Even if leading a blind life presents frustrating obstacles, she said, she has vowed to live her life to the fullest.