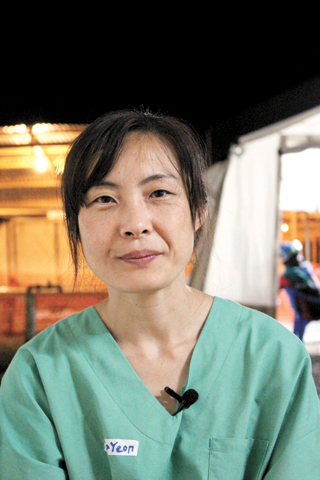 “Thoughts like, ‘What should I have done?’ and ‘Should I have tried other treatments?’ would always come up in my mind, and it bothered me,” she admitted in an interview with the JoongAng Ilbo last week. “Sometimes I was outraged by a fact that there is no vaccine for the Ebola even though the epidemic has been around for 40 years.”

Dr. Kim is a family physician who works for Doctors Without Borders (MSF), a French humanitarian aid organization.

From December to January, Kim treated Ebola patients at a treatment center in Magburaka, Sierra Leone, where 3,655 people have died from the virus so far. 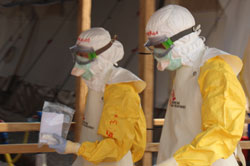 Kim, left, works with her colleague at the medical center in Sierra Leone during a recent stint in Sierra Leone to treat Ebola patients. Provided by Doctors Without Borders

She is one of two Korean doctors from MSF who have participated in medical relief work to fight Ebola.

Kim decided to dedicate herself to international relief work after joining a club that advocated medical volunteer aid when she was a freshman in college. She aspired to treat those who live in regions isolated from medical service due to war and military conflicts.

After obtaining a degree in family medicine, Kim studied tropical medicine in Thailand.

Since 2008, she has treated patients suffering from AIDS, tuberculosis, measles and yellow fever in countries like Ethiopia, Uganda and Yemen. But despite numerous run-ins with death, the Kim said she was shocked seeing Ebola patients in Sierra Leone.

“I thought I was familiar with seeing death due to my previous experiences, but what I saw in the Ebola treatment center surpassed that,” she said. “Too many people came to the center and died.”

The treatment center consists of 40 medical staff, including a retired pediatrician from the United States and a specialist on tropical medicine from the Netherlands. Over six weeks, about half of the 75 patients hospitalized there had died.

Kim’s schedule at the center was tight. She cleaned vomit and human waste, gave out medications and did checks on patients.

Treatment was determined by a doctor, though there is no difference in tasks between doctors and nurses.

“It allowed me to remember what is significant for a doctor, which I had forgotten in Korea,” she said.

But Kim added that the successful treatment of an Ebola patient didn’t always bring happiness, either.

She then brought up a 5-year-old boy who came to the treatment center in bad condition.

“All of the staff paid attention to him, seeing if he could finish a meal, and his condition improved after three weeks,” Kim said.

Later, when the boy was about to be discharged from the center, she noticed that he looked desperate.

“He seemed to know he would not have enough food or receive the kind of care he got in the center,” she said.

Yet, death wasn’t all the doctor faced in Sierra Leone. There were happier moments.

Kim recalled a story about a pregnant 17-year-old girl.

A baby born from a mother with Ebola is often fed with the mother’s milk because it is common that the baby is also infected and won’t make it. “But we decided to feed the girl’s baby with powdered formula,” she said. “The mother fully recovered, and she and the baby were able to leave the center healthy.”