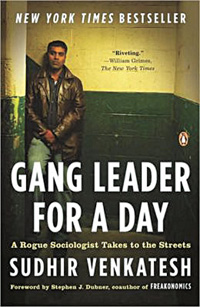 A Rogue Sociologist Takes to the Streets

When first-year graduate student Sudhir Venkatesh walked into an abandoned building in one of Chicago’s most notorious housing projects, he hoped to find a few people willing to take a multiple-choice survey on urban poverty - and impress his professors with his boldness. He never imagined that as a result of this assignment he would befriend a gang leader named JT and spend the better part of a decade embedded inside the projects under JT’s protection. From a privileged position of unprecedented access, Venkatesh observed JT and the rest of his gang as they operated their crack-selling business, made peace with their neighbors, evaded the law, and rose up or fell within the ranks of the gang’s complex hierarchical structure. “Gang Leader for a Day” also tells the story of the complicated friendship that develops between Venkatesh and JT - two young and ambitious men a universe apart.