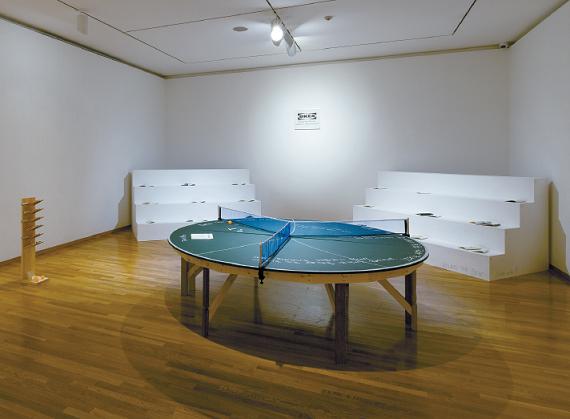 This strange ping-pong table, on display at Kumho Museum of Art, is a piece titled “A Ping Pong Table for All” by artist Mokyon Yoo.

With this table, the game is no longer about winning or losing but an amusement or a dance, according to the museum curators. It is part of the group show “Uncertain Regard” at Kumho Museum of Art east of Gyeongbok Palace in central Seoul.

The show celebrates the 10th anniversary of Kumho Art Studio, a residence program run by the museum to support young Korean artists. Since 2005, the studio has provided one- or two-year studio rentals to each of its 61 artists.

Among the artists, 10 were selected by the museum’s curators and four art critics for this exhibition. The work on display encompasses paintings, installations and sound art. Admission is 3,000 won ($2.9). For more information, call (02) 720-5114 or visit www.kumhomuseum.com.

Provided by the museum