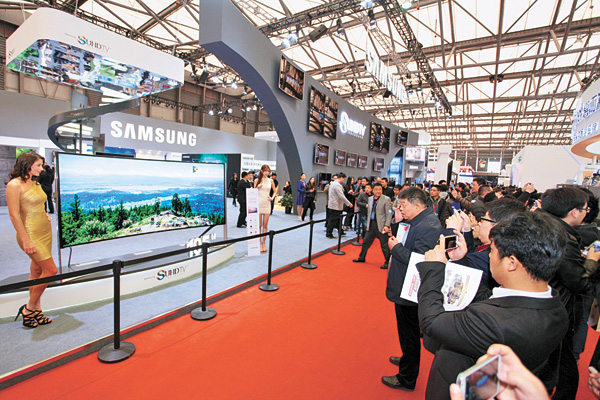 Samsung Electronics unveils its latest high-end TV sets at the Appliance & Electronics World Expo 2015 in Shanghai. Provided by the company

Competition is heating up in the next-generation television market as tech giants Samsung Electronics and LG Electronics target countries overseas with their latest high-end TV sets.

Samsung is setting its sights on China, the world’s biggest market, with its new SUHD models. The company showcased its high-end lineup at the Appliance & Electronics World Expo 2015, Shanghai.

The units on display include the world’s largest curved TV, the S9W, and the JS9000 series equipped with quantum-dot nanocrystals.

Quantum dots are microscopic nanocrystals made of semiconductor materials that allow for higher brightness and better color accuracy than normal ultra-high definition TVs. 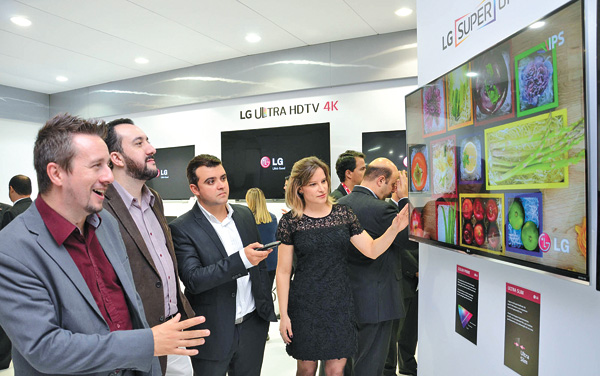 The technology is touted as the key to creating enhanced displays on smartphones as well as TVs.

Some 20,000 people visited Samsung’s pavilion during the annual expo that ran from Wednesday to Saturday. The electronics manufacturer was awarded the China Appliance Grand Prize by China Household Electrical Appliances Association at the exhibition.

“The fact that Samsung received China’s best home appliance award will serve as an important indicator when we market SUHD TVs in China this year,” said Kim Kwang-jin, director of the digital display division at Samsung Electronics. “We believe the latest TVs that come packed with advanced technologies will appeal to Chinese consumers.”

Samsung, the world’s largest TV manufacturer, will introduce 55, 65, 78 and 88-inch curved SUHD models, as well as 55-inch and 65-inch flat screen versions within this year.

While Samsung focuses on China, LG Electronics, the world’s No. 2 TV maker, is looking at Brazil to market its latest model, the Ultra OLED TV.

LG said it has doubled its OLED TV lineup for Brazil this year to respond to the growing demand there.

The company presented its new models for 2015, including the 55, 65, and 77-inch models of the Ultra OLED at its Digital Experience 2015 showcase, held in Sao Paulo on Thursday.

By applying its Wide Color LED technology, the company has changed the fluorescent LED structure of the TV’s backlight for higher definition and has maximized its ability to reproduce color with an enhanced color filter.

LG also showcased its Super Ultra there, a TV set that is a tier above the company’s Ultra HD TV series with the expanded color range on its display.

All the TVs will run on LG’s own operating system, dubbed Web OS 2.0. LG said the new operating program is a simplified version of the company’s previous user interface.

The upgrade is a response to complaints that many smart TVs have menus that are too complicated.

The new models will also feature functions tailored for sports fans. Users can record key moments of gameplay and switch on advanced sound and resolution modes.

The tech giant said it plans to strengthen its position by commercializing its new high-end releases.

“We will bolster our presence with this year’s new lineup, including the Ultra OLED TV and Super OLED HD TVs,” said Byun Chang-beom, an executive director at LG’s Brazil office.