14th Hyundai store to be opened in Sindorim

14th Hyundai store to be opened in Sindorim 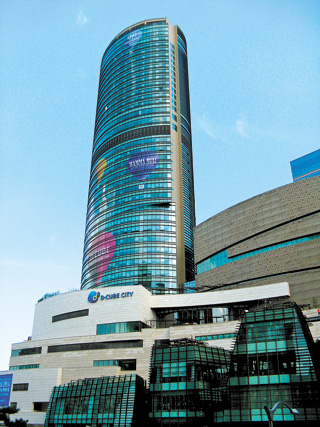 Hyundai Department Store will open its 14th branch in Sindorim, southwestern Seoul. Provided by the company

The 14th Hyundai Department Store will be located in a 42-story building, including two floors underground, that is currently occupied by D-Cube Department Store and Sheraton Seoul D-Cube City Hotel, right next to the Sindorim Station. The site has about 110,000 square meters (1.2 million square feet) in gross area.

Hyundai said it signed a lease with JR AMC, owner of D-Cube Department Store, for the two underground floors and six floors above ground for the next 20 years.

JR AMC is the operator of a real estate investment trust (REIT) unit that purchased D-Cube for 265 billion won ($233 million) from Daesung Industrial on Thursday. The REIT is owned by the Government of Singapore Investment Corporation and Canada Pension Plan Investment Board.

D-Cube Department Store will be replaced by Hyundai Department Store by May, the company said. Sindorim is one of busiest places in Seoul with a transient population of 130,000 people a day, a lucrative commercial district.

With the new branch, Hyundai will have seven branches in Seoul.

Hyundai also inked a deal with Pine Tree Asset Management on Friday to lease the Cerestar building on a 74,000-square-meter plot of land in Dongdaemun, central Seoul. Hyundai will use the nine-floor building, plus four underground floors.

The Dongdaemun district has three subway lines and is a high-profile shopping site.

Hyundai is considering opening an inner-city outlet mall or duty-free mall in Dongdaemun. The building is currently under reconstruction.

“D-Cube Department Store and Dongdaemun Cerestar have convenient transportation access,” said Kim Chang-seob, an executive at the department store. “Due to the large transient population, the locations have a high probability of growth. Hyundai will make the places shopping landmarks with differentiated products and services.”

Hyundai Department Store is also trying to diversify its revenue sources by breaking into the discount outlet business.

While sales at department stores are stuck in single-digit growth, sales at outlet malls have constantly shown more than 10 percent growth annually.