Korea pinned between superpowers this week

Korea pinned between superpowers this week 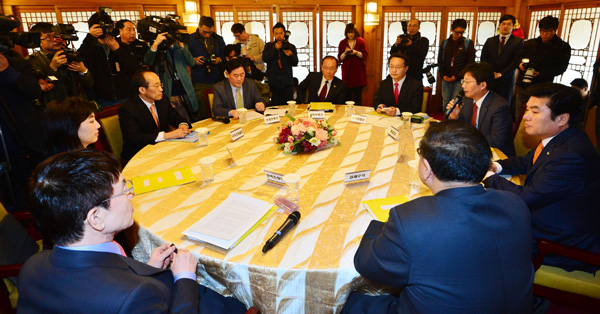 A policy coordination meeting among members of the ruling party, the administration and the Blue House was held Sunday at the prime minister’s residence in Seoul. Thaad and AIIB were expected to be discussed.[NEWSIS]

Seoul is caught up in a messy diplomatic tangle with the United States and China as it deliberates sensitive issues that can alienate one ally or the other.

Korea is especially conflicted over the issues of whether to deploy a Washington-led Terminal High Altitude Area Defense (Thaad) missile defense system in Korea, which Beijing is opposed to, or to join the China-led Asian Infrastructure Investment Bank (AIIB), which Washington doesn’t like.

Both issues are on front burners as high-ranking officials from Washington and Beijing will be in Seoul this week.

Liu Jianchao, Chinese assistant minister of foreign affairs, kicked off a four-day visit Sunday, according to the Korean Ministry of Foreign Affairs, his first trip to Seoul since he took the post in 2013. Liu heads to Tokyo afterwards.

Daniel Russel, U.S. assistant secretary of state for the Bureau of East Asian and Pacific Affairs, visits on Monday for two days. Russel is expected to check on Ambassador Mark Lippert, who is recovering from a knife attack by a radical nationalist in Seoul earlier this month. His visit is expected to be an opportunity to emphasize the Korea-U.S. bilateral alliance.

“Russel is visiting only Korea this time, which signals that there is an urgent, pending issue between Korea and the U.S.,” a Korean foreign affairs official said. “Russel’s objective in his visit is likely to check on Ambassador Lippert, who is a heavyweight in Washington, in person, and send a message that the Korea-U.S. alliance is steadfast.”

Two weeks ago, Under Secretary of State for Political Affairs Wendy Sherman made a controversial remark at a forum in Washington, which was construed in Seoul and Beijing as Washington siding with Tokyo on sensitive historical and territorial issues. Russel will probably try to alleviate concerns in Korea over the remark.

The official added, “The Thaad or AIIB issue are not related to his visit.”

However, the U.S. Forces Korea last Thursday admitted that it has conducted site surveys in South Korea over where to deploy the anti-ballistic missile system, which is aimed at countering North Korea’s missile and nuclear threats, though the United States maintains that there has been no official discussion with Seoul on the deployment of the shield.

Members of the ruling party, the government and Blue House officials were set to discuss the anti-ballistic missile system among other issues at a meeting at the prime minister’s residence on Sunday.

Both Beijing and Moscow are against deployment of a Thaad battery in Korea because they worry that its radar system, which can cover 1,000 kilometers (621 miles), could be used as a method of surveillance against them.

The AIIB is envisioned as a new financial institution to rival the World Bank and particularly the Asian Development Bank, which are dominated by Western countries and Japan, with the aim of creating a new financial order centered around China.

it could put a damper on its alliance with the United States. Washington has expressed concerns that China will use the bank for political purposes.

“Especially after last year, after President Xi Jinping visited Korea and clearly stated his position on Thaad and AIIB, all Chinese officials that have visited the country since have reiterated their stance,” one diplomatic source said. Xi made a state visit to Korea last July. “Liu likewise will be the same,” he said.

Local media reported Sunday that Seoul may make a final decision on the AIIB later this month. The United Kingdom announced it would join last week despite U.S. objections. The official added that in regards to the AIIB issue, the “U.S. will have to emphasize principles to Korea once more, such as ascertaining transparency of the AIIB.”