Abused adoptee could be deported

Abused adoptee could be deported 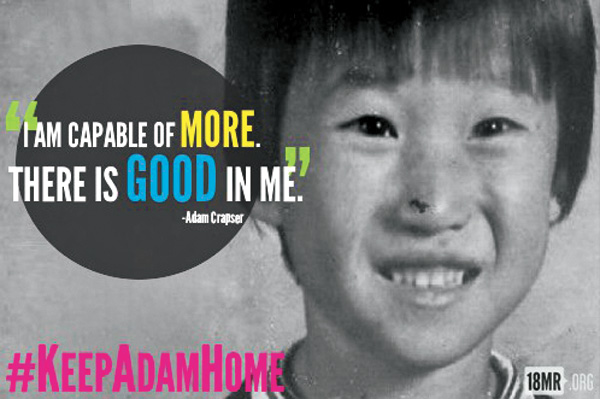 A Korean adoptee in the United States, who managed to build up a life with his wife and three children even after serious physical, emotional and sexual abuse by his adoptive parents during childhood, is about to be deported back to South Korea - because the parents never got him citizenship.

An online petition has been started for Adam Crapser, or Sin Song-hyeok in Korean, to let the 40-year-old stay in his adopted homeland. More than 8,000 people have signed the petition on the website of the Asian-American advocacy group 18MillionRising as of press time Sunday.

According to the online petition, the four-year-old boy was first adopted by the Wright family in Michigan in 1979 with his older sister, but they were regularly physically abused. The Wrights relinquished their parental rights without naturalizing Adam, and he was readopted by the Crapser family in Oregon in 1987, where he was subjected to physical, emotional, and sexual abuse that amounted to torture, according to the website. His sister was adopted by a different family.

Adam fell into a life of crime and had to live on the street. But he turned his life around, married and is about to have his fourth child in May.

But since neither of the two adoptive families completed the documentation to naturalize him, he is an illegal alien facing deportation.

“They promised us a better life over here,” said Crapser in an interview with Gazillion Voices, an online magazine for adoptees. “All I’m asking is to keep their promise and do what they said they’d do. And if not for me, then for my children.”

Crapser was notified of deportation proceedings in January by the Department of Homeland Security, citing crimes committed in his youth. Apparently, those crimes included breaking into his adoptive parent’s house to steal his adoption papers and a Korean bible he brought from South Korea.

He has no connections with Korea. A hearing for his deportation is scheduled on April 2.

Children adopted by Americans are now given citizenship automatically thanks to the Child Citizenship Act of 2000, but the law does not cover those adopted before 2000.

Advocacy groups are seeking to revise the law so that people who were adopted before 2000 can acquire citizenship to prevent another case like Crapser’s among about 100,000 Korean adoptees in United States.