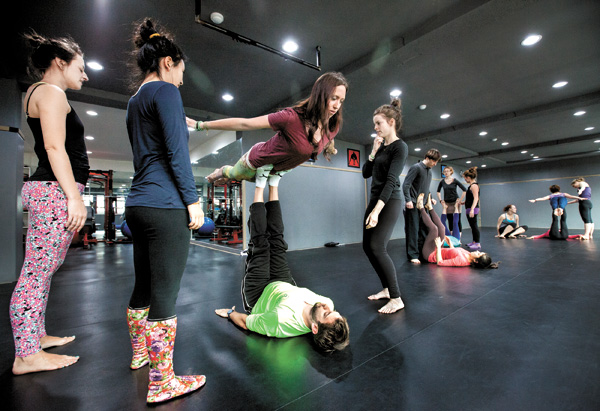 Members of Acro Yoga Seoul, an Acro Yoga club with Korean and foreign residents, move into the Front Bird pose on March 1, in a gym in Yongsan District, central Seoul. By Park Sang-moon


It was a little past 3 p.m., with the sun high in the sky but the air still too brisk for spring, when 16 people gathered and sat cross-legged in a circle, blushing at the strangers they knew they’d be mingling with for the next two hours.

Wearing figure-hugging tights and sleeveless tops in a variety of shapes and sizes, each person took turns sharing their names and native countries. All but five were foreigners from places including the United States, Germany and the United Kingdom.

“Feel the power in your hands everyone,” said Melodi Crowson, from Louisiana, as she led others to stand in the same round circle, but this time spreading their arms sideways to wrap around the waists of the person next to them.

As Crowson raised her voice to instruct the group to spread their right legs out into the center of the circle, bursts of laughter finally broke free as the attendants, mostly between the ages of 20 and 45, struggled to strike a balance.

“Guys, feel comfortable with each other! Find that comfort zone!” yelled Crowson.

For members of Acro Yoga Seoul, who gathered at an indoor gym in Yongsan District, central Seoul, earlier this month, breaking the ice with their fellow yogis was an indispensable step in continuing with other postures that required flipping, tossing, pushing and squeezing each other, skin to skin.

The club is open to anyone who pays 10,000 won in advance, which Crowson, the organizer, explains goes toward using the mats in the rented location. And the people who attend the biweekly meet-ups often diversify.

That aspect, as is normally the case with other social leisure groups, tends to add an air of awkwardness among its members, which Crowson emphasized must be tackled, at least in some part, before each session.

“Acro Yoga is all partner-based,” said the freckled 38-year-old, an associate professor of hotel management and culinary arts at Bucheon University in Gyeonggi.

“Your progress completely depends on communication, and it’s not really an ability as much as it is talking. You have to get really comfortable telling each other what to do - otherwise, you will never progress.”

A combination of yoga and acrobatics, Acro Yoga mixes the physical, mental and spiritual disciplines of yoga with the gymnastic techniques of acrobatics, and is based on teamwork between partners. The term was first used in 1999, and the number of instructors worldwide is incredibly limited, with Acro Yoga Seoul being no exception.

None of the members in the group is a certified Acro Yoga instructor, although most, including Crowson, have either practiced yoga for several years or passed other yoga training courses.

She herself is preparing to go to Japan in May to work toward becoming an official Acro Yoga instructor.

For now, though, she and some of the other experienced members in the group gather a couple days or hours in advance of the club’s meet-ups, held every other Sunday, and reference an Acro Yoga manual for guidelines on what poses to try.

In groups of four - one flyer, one base and two spotters - club members took turns doing poses that Crowson spent five to 10 minutes explaining and demonstrating in advance.

The base refers to the person lying on the ground with his or her entire back in full contact. The flyer is the person flung off the ground by the base, usually by the latter’s limbs. The spotters keep an eye on the other two and improve their forms, making sure no one gets injured.

One by one as the yogis reversed their roles among themselves, struggling to create the perfect pose, the initial awkwardness soon slipped away.

“It’s all about trust! You’ve got to keep straight and trust the person!” Crowson yelled across the room as she walked around fixing others’ postures and answering questions.

At one point, the group attempted the Front Bird pose, in which the base lifts his or her feet vertically to hoist the flyer into the air. The flyer then spreads both arms outward and stretches his or her legs straight back.

“Jack, I’m flying!” a flyer from one group yelled, giggling, a reference to the 1997 film “Titanic.”

“So do you like my feet here?” another base asked.

“Just see how you feel. Straighten your arms. Tighten your core,” advised a spotter.

It soon became obvious that the class wouldn’t be a conventional yoga lesson that stresses absolute silence and inner peace. With cheers and boisterous laughs reverberating in the room, there were no longer separate concepts of you and I, but only us.

“Yoga [in general] is very personal,” said Erica Anne Vandermeer, 20, a U.S. soldier who has a tattoo of a world map on her back. “But Acro Yoga is based on a connection with another person. I do it when I simply want to talk and laugh with others.”

When asked if she felt uncomfortable training with the opposite sex, she replied that she was not, particularly after being surrounded by fellow male soldiers all day.

“To do Acro Yoga, you have to feel comfortable doing it with everybody and anybody,” she added. “You have to be like, ‘I don’t know what you’re doing but I’m going to trust you, and you’re going to trust that I know what I’m doing.’”

Of the 16 yogis who showed up that day, only two were men, including Achim Bayer, a Buddhist studies professor at Dongguk University, who has been with Acro Yoga Seoul for the past six months.

“It looks very dangerous and difficult when seeing it from the outside,” the 44-year-old German native said, “but we’re in a room with mats, and if you fall, you don’t fall really hard.”

When asked about the greatest impact Acro Yoga has had on him, Bayer mentioned his two children - ages 1 and 3.

“I take home the poses I’ve learned here and do it for them at home, and they just love it. The biggest change is that I now have something fun I can do with them.”

That innocence, said Crowson, is always apparent, even among the adults in her group.

“When you see the first time people try the Front Bird pose, the looks on their faces are like little kids. It never gets old to see the joy people flash when they fly for the first time.”

When the weather grows warmer, Acro Yoga Seoul will move its training outdoors along the Han River, where a participation fee will no longer be required.

For more information about the group, visit www.meetup.com/Acro-Yoga-In-Seoul/.