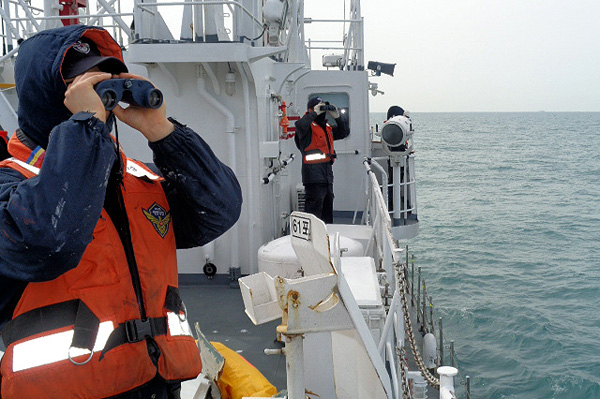 Coast Guard staff on a patrol ship on Saturday search for three missing crew members of a helicopter that crashed into the sea near Gageo Island off Korea’s southwestern coast Friday evening. [NEWSIS]

One crewmember has died and three others are missing after a Coast Guard helicopter crashed into the sea near Gageo Island off Korea’s southwestern coast on Friday evening during a mission to evacuate an emergency patient.

Park Geun-su, 29, was found unconscious in the ocean about two hours after the helicopter went down. He died an hour later.

“The helicopter had difficulty finding a landing spot because of thick sea fog, so I signaled with a lantern,” said Kim Hyeok-jae, a 40-year-old government worker who witnessed the incident from the island.

“They tried to land but abruptly crashed into the water.”

The Coast Guard believes the two pilots struggled when faced with the fog because neither had ever experienced landing on the island.

Choi, who served as a helicopter pilot in the Navy for nearly 22 years, joined the Coast Guard in 2008 and was transferred to the area in February. The authorities said he had little more than three hours of nighttime flying experience after he moved.

Baek also spent 22 years in the Navy. He began working for the Coast Guard in July but had never landed on Gageo Island before.

The helicopter was sent to take a 7-year-old boy with acute appendicitis to a mainland hospital. Gageo’s public health center reported the situation to the mainland authority earlier that day, but the local fire station responsible for aviation evacuations from the island refused to send its helicopter, citing bad weather conditions.

The South Jeolla Fire Aviation Corps said its guidelines state that helicopter flights are restricted when wind velocity is 10 meters per second (32 feet per second) or higher, visibility is five kilometers (3 miles) or lower or cloud height is 500 meters or lower, though the final decision is made by the captain.

The medical authority subsequently contacted the Coast Guard for assistance, and Choi made the decision to set off on the mission.

The Coast Guard said it had flown another patient from the area in a helicopter earlier on Friday.

After the accident, the child with appendicitis was taken to a mainland hospital via ship for surgery.

“According to the Navy data, the atmospheric conditions weren’t bad for flight given that the wind speed at the time was 10 meters per second, visibility was 9.3 kilometers and cloud height was 500 meters,” said Song Na-taek, chief of the West Regional Headquarters Korea Coast Guard.

“But because Gageo Island often has regional sea fogs, it is expected that the exact cause of the accident will be revealed after analyzing the chopper’s recording device.”

Song added, however, that the area’s islands should have a better system for rescue helicopters.

“[Landing on Gageo Island] during daytime is not very difficult because the landing spot is visible, but it might be very dangerous in the dark because the island does not have any lighting or guiding system,” Song said.

The Coast Guard and the Navy have dispatched nearly 40 vessels and 12 aircraft to search for the missing crew members and the helicopter, mainly concentrating on the sea southwest of Gageo Island, where some parts of the chopper were found on Saturday.