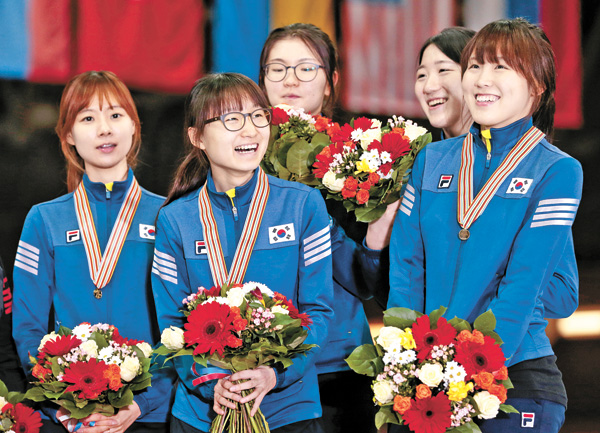 It was her first appearance at the International Skating Union (ISU) World Short Track World Speed Skating Championships, and Choi Min-jeong left Moscow on Sunday as the overall champion.

The 16-year-old Seohyun High School student beat Italy’s Arianna Fontana and defending champion and compatriot Shim Suk-hee. She collected 89 points, ahead of Fontana with 68 and Shim with 47.

At the world championships, titles are awarded for each race and the overall champion determined on a point system. The winner of the each race gets 34 points, the runner-up 21 and third place 13.

Sunday was a different story.

In the 1,000-meter, she clocked 1:32.73 to beat Elise Christie of the United Kingdom by 0.052 second to win the first gold medal for Korean national team.

Choi thanked the senior members of the team for the victory. In the 3,000-meter, she recognized Shim, saying her teammate checked and contained other skaters.

“I’m still dazed as I didn’t expect much in this event, because there are great athletes like Suk-hee and A-lang, while other skaters looked to be in good condition,” said Choi. “I still think I’m little behind.”

Choi also helped Korea win 3,000-meter relay alongside Shim, Kim and Noh Do-hee. The women’s team finished in 4:18.55 to beat China by 0.045 second. This was the Korean women’s team’s first gold at the Worlds since 2010. Last year, the team suffered a disqualification.

“With my roommate Suk-hee, we just kept saying let’s do well and there was no other talk because each of us had a commitment,” she said.

Choi, who began skating at the age of 6, has been widely considered the next leader of Korean women’s short-track speed skating, along with the 18-year-old Shim, who already has Olympic gold medals.

After finishing third overall in the World Junior Championships, Choi has been skating at the senior level for the first time this season and collecting good results.

Choi won gold in the 1,500 at the second World Cup stop in Montreal in November and in the 1,000 at the following World Cup event in Shanghai a month later. She also won the 1,500-meter race in Dresden, Germany, in February.

She also showed the potential to become the ace of the national team. While Shim was suffering with the flu, Choi carried the national team at the fourth World Cup in Seoul in December, winning the 1,000 and 3,000 meters. According to the ISU World Cup ranking, Choi is No.1 in the 1,500 meters.

However, Park came up just short in the overall competition. Although the 21-year-old Korean tied with Sjinkie Knegt of the Netherlands with 63 points, he was 0.023 second behind him in the final 3,000-meter race and had to settle for second overall.