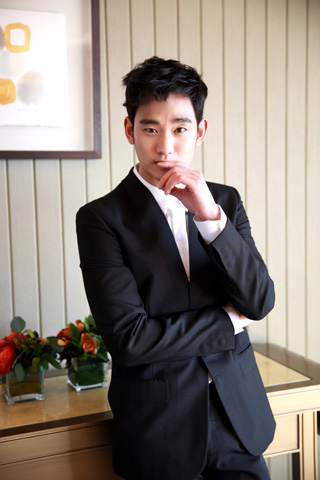 Actor Kim Soo-hyun, of last year’s biggest hit Korean drama series “My Love from the Star,” has become a model for Jeju Air.

The budget airline said Monday it wanted to expand its base in Asian countries and therefore chose Kim.

The airline has hired Korean Wave stars such as boy group Big Bang and actor Lee Min-ho in the past as its public ambassadors.

“People will see Kim’s face on various printouts of Jeju Air, and his face will also be on the exterior of some of our airplanes,” the airline added.

Kim is a top A-list actor in Korea. He has endorsed numerous products, from clothing to coffee to department stores.

Some industry insiders expect that Kim will be able to earn up to 50 billion won ($4.4 million) based on his immense popularity, especially in China, just by appearing in TV commercials this year.

The 27-year-old actor is expected to enlist in the army this year after appearing in new drama series “Producers,” in which he will pair up with actress Kong Hyo-jin, actor Cha Tae-hyun and singer-actress IU.