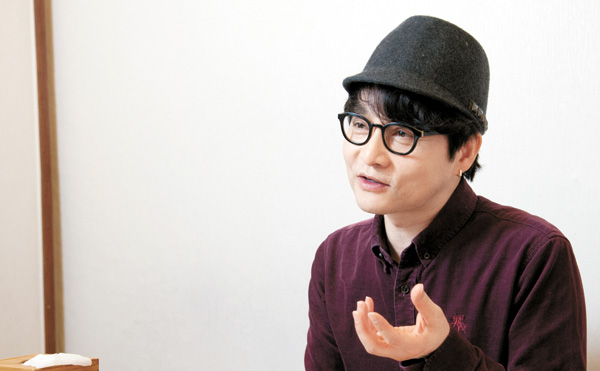 Director Kim Jho Kwang-soo, 50, has been one of Korea’s most prominent gay activists since he came out publicly nearly a decade ago.

He has directed several indie movies with LGBTQ themes such as “Two Weddings and a Funeral” (2012), but his most recent stint in film was as a producer on commercial film “Detective K: Secret of the Lost Island.”

He discussed the box office success of the sequel to “Detective K: Secret of the Virtuous Widow” and his struggles as a gay filmmaker and activist with the JoongAng Ilbo, an affiliate of the Korea JoongAng Daily, earlier this month.


Q. Are you satisfied with how “Detective K: Secret of the Lost Island” is doing at the box office?

A. “Detective K: Secret of the Virtuous Widow,” directed by [Kim] Seok-yoon in 2012, gained 4.7 million admissions, and I hoped “Detective K: Secret of the Lost Island” [released on Feb. 11] would sell more. But I think 4 million will be the final number for the film, which has already passed its break-even point. The audience’s response was not as enthusiastic as I expected. Its opening was successful because audiences had high hopes after the first “Detective K” film, but it didn’t live up to public expectations. The plot was somewhat loose despite the great action scenes. It was weak as a mystery film compared with the previous in the series.

But was it enough to make another “Detective K” film?

Director Kim, [the film’s main actors] Kim Myung-min and Oh Dal-su and I decided to make the next sequel of the “Detective K” series on the KTX train while coming back from curtain calls in Busan and Daegu. We became adamant after its worse box-office ranking than the first series. 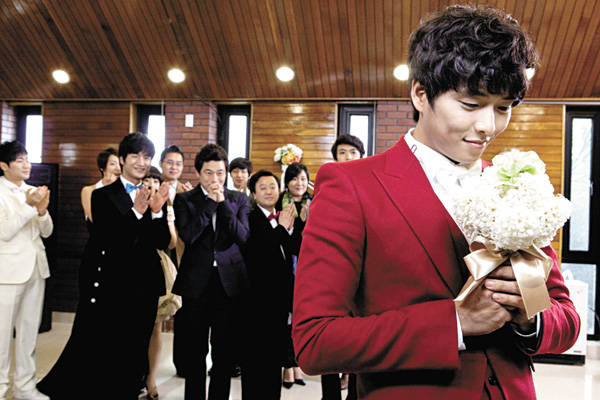 A vampire appears in the film’s epilogue. Was this a teaser for your next work?

It wasn’t related to my next movie. I’m preparing to direct a historical drama, “Secret Royal Inspector, Classic Scholar,” which a vampire appears in, but it was just coincidence.

Has the “Detective K” series been important for you?

I was one of the poorest directors, but the box-office success of “Detective K: Secret of the Virtuous Widow” cleared my debt, and I finally made a profit on “The Client,” directed by Son Young-sung.

So of course, the “Detective K” series has been special for me.

Have you ever thought about leaving the film industry during rougher times?

Worries about communicating with the audience as a commercial filmmaker were much bigger than the financial problems I faced. Even though I cast A-list actors such as Kim Myung-min of the “Detective K” series and Ha Jung-woo of “The Client,” I made up my mind to make independent films with my money if my success at the box office was not great. Fortunately, both of the movies were hits.

When did you start dreaming about making movies?

When I was in elementary school, I went to Daeji Theater in Miari Street [northern Seoul], which has now closed its doors. The first movie I watched was “King Kong” (1976), and the moment the lights from the projector beamed onto the screen, the audience cheered.

The moment made me decide to make a film. I finally persuaded my mother after eight days of fasting to let me enter a department of theater and movie [at college].

I heard that you didn’t study while at university. Instead you became a student activist.

At the welcome party for the freshmen, my friend’s sister told me the truth about the Gwangju Democratization Movement [the student-led pro-democracy movement in the 1980s], and I decided to be an activist. The movement broke out when I was in high school and was worried about nothing but my sexual identity. I felt ashamed and guilty, and it made me fall into the student movement. It also made me not worry about being gay, which I liked.

I heard that your role at the demonstrations was to draw a laugh.

I was too small to handle the wooden bars or bottle grenades. The seniors and juniors asked me to shout the chants. I wanted to garner attention, so I danced with female students to brighten up the mood. Sometimes I presided over the gatherings and made people laugh. 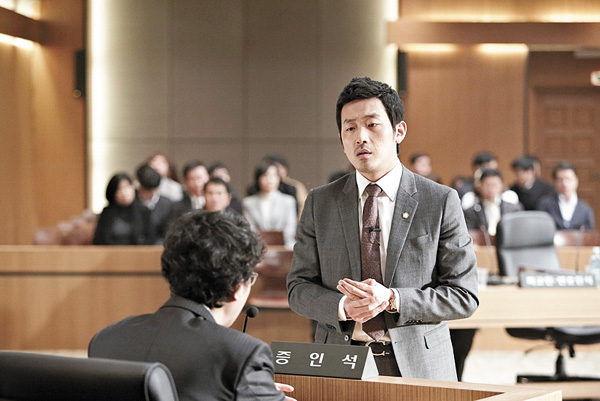 Scenes from “The Client” (2011) Provided by the distributors


You eventually went into the film industry. How did this happen?

I didn’t know anything when I graduated in 1993 because the only work we did at university was the student movement. Jung Ji-woo and Kim Yong-gyun, who worked at Generation, a foundation for independent film, suggested working together, and my first job in film was in PR and planning.

When did you know that you were gay?

I agonized over it when I liked a boy in my class as a freshman in high school. I talked about my troubles with other people and everyone said I had a dirty disease. Being a Christian made my life more difficult. I couldn’t sleep unless I punished myself in some way. Sometimes I went to sleep after reciting the Lord’s Prayer 1,000 times. I joined the weight-lifting club and school gangs when I was a sophomore. I was lucky to meet a friend who had common worries because it allowed me to realize that homosexuality is not a disease or something I should feel guilty about.

When was the first time you accepted that you were gay?

I discovered Pagoda Theater in 1993 during the demonstrations by chance. It was the most popular place for gays. A guy in his 30s at the theater told me that gay people in Sweden form organizations for homosexuals and hold parades together. It changed my life. I decided I had to start a human rights movement, forming a social activity combined with a gay movement. Then I started to study homosexuality. It was the moment that film and the gay rights movement became the core of my life.

When did you decide to come out?

A reporter asked whether the gay character in the film “Wanee and Junah” was motivated by me or not, at a press conference in 2001. I denied it at the time, but I was skeptical of how long I could pretend. I even cried when the reporter kept calling me, asking the same question, yet it made me make up my mind to come out. When I produced the film “No Regret,” directed by Lee Song Hee-il (2006), I came out. The reason why I didn’t out myself until then was because it could have negatively affected the film’s casting and investment. 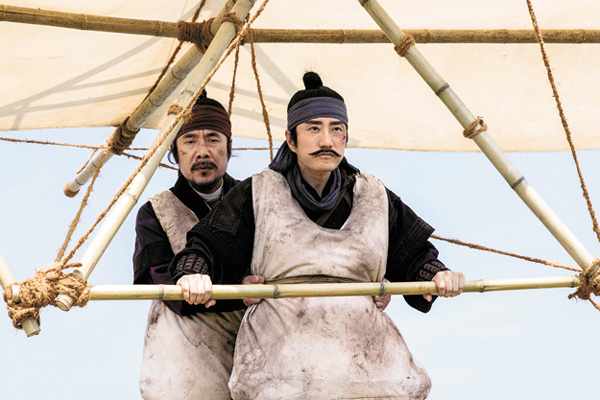 Scenes from “Detective K: Secret of the Lost Island” (2014). Provided by the distributors

Do you think your sexuality ever influences your work?

I spent my adolescence worrying about my identity and realized I have both masculine and feminine traits. These help me have an eye for casting the actors with potential to be stars.

I often hear that I was the one to discover Yoo Ah-in, Lee Jae-hoon and Kim Nam-gil. Gay people have a better eye for finding potential stars than straight people. There is a scene in the U.S. TV drama series “Sex and the City” in which Samantha shows an unknown model to her gay friends to prove his star quality. My taste is in the same context.

I strongly believe in my eye and cast actors I feel have the potential in my film. I was pleased when I saw Jo Bok-rae recently appearing in the movie “C’est Si Bon” (2015) after I cast him in my independent film “One Night” (2013). I believe he will be the next Song Kang-ho.

Some people point out that queer movies contain messages that are too direct and make heterosexuals uncomfortable. How do you feel about this?

My sense of duty as a queer filmmaker caused me to produce enlightenment films with strong messages, and I think it could be a problem. After I filmed “Two Weddings and a Funeral,” which shows the real problems experienced by a gay couple, I thought I didn’t have to talk about gender identity and sexual minorities through stories about gay couples anymore. Soon, I started to think I could produce mainly heterosexual movies that include homosexual love.

Is this a movie you’re planning to make?

I am doing my best to tell the story of a vampire, a target of hatred, who hides his identity, in the commercial film “Royal Secret Inspector, Classic Scholar.” I hope the film will indirectly reveal the severity of the violent viewpoints the majority have towards minorities. Bryan Singer of “X-Men 2” included a scene in that film showing a mutant confessing his identity to his parents. To reveal the problems minorities face in a Hollywood film impressed me.

Have you included any of your own experiences in your movies?

The story about a soldier spending an evening with his mother and his boyfriend in his room because they visited him at the same time [“Just Friends?”], a boy who falls in love with a boy on the bus [“Boy Meets Boy”] and the story of a young man who was shocked after hearing his boyfriend was married [“One Night”] are my stories. I wanted to show my ups and downs in my films.

Is it hard to cast actors or actresses for queer movies?

Agencies usually refuse even when the actor or actress would like to participate. I think the top movie stars should appear a lot without prejudice in queer movies to popularize the genre. Matt Damon took a role in the film “Behind the Candelabra,” directed by Steven Soderbergh (2013). I think I should aim to make hit box office movies or win trophies from renowned international film festivals in order to cast top stars for my queer films. Even top Korean actor Zo In-sung appears in “A Frozen Flower” directed by Yoo Ha (2008).