Despite the surging popularity of coffee, the profit margins of major cafe chains have plummeted due to the exorbitant cost of rent and personnel management.

The somber fact is most evident in Starbucks Korea’s financial records.

Although its sales reached a record of more 600 billion won ($530.3 million) last year, its operating profit margins - the ratio of operating income divided by net sales - recorded a mere 6.5 percent, according to an annual report by Starbucks. The ratio is considered a key indicator of profitability and how much money is left in Starbucks Korea’s coffers.

By the current ratio, Starbucks Korea can only earn 266 won after it sells a tall americano, which retails at 4,100 won. 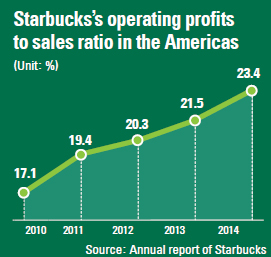 The ratio in the Americas stood at 23.4 percent on average last year while it was 33 percent in Asia.

The biggest reason for the lower margins is the expenses used on renting property and managing human resources.

The coffee franchise’s combined rent for its stores has grown by around 27 percent due to the launch of new shops and rising rental fees.

This increase in costs is comparable to the growth rate in its operating profit at 25.3 percent, making its boost in profits nearly meaningless.

“While Americans prefer take-out, Koreans like staying at the venue, talking or doing business,” said a representative of Starbucks Korea.

“This is why Korea branches need larger areas.”

Among the 740 Starbucks stores in Korea, the majority of them measure more than 231 square meters (2,486.5 square feet). But those in the United States are about 132 to 165 square meters on average.

Starbucks will also find it hard to cut personnel expenses.

“We directly operate all Starbucks stores, and 99 percent of employees are regular workers,” the representative said. “So we need to provide severance pay and different incentives. Counting all this, workers’ hourly wages are far higher than 10,000 won.”

“Rental fees account for 25 percent of sales,” said a coffee chain employee. “So that makes it difficult to make a two-digit operating profit margin. Some downtown areas charge 40 to 50 million won monthly for property.”

“If the location is really good, the landlord charges even more,” Han said.