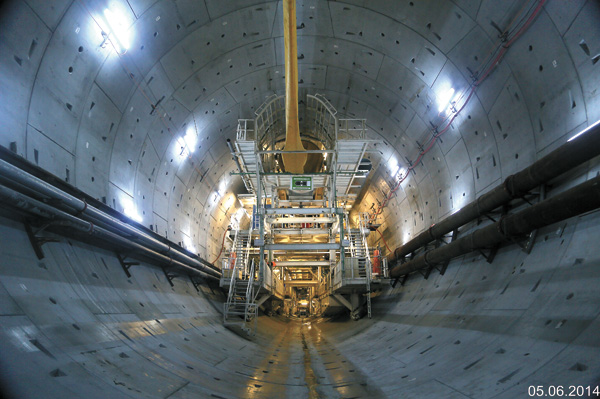 SMEs, lacking the resources and name recognition of large international competitors, often are required to provide a guarantor even after receiving a down payment from an ordering body.

The government said last week that state-run financial institutions such as the Korea Export-Import Bank and Korea Development Bank will be guarantors with commercial banks to help SMEs perform better in the global market. The financial institutions will guarantee 90 percent of the deposit and private banks 10 percent. The government will test the system with 100 billion won ($88.6 million) and plans to expand later.

The Ministry of Strategy and Finance held a conference March 11 to discuss how it should support builders competing for international construction. At the conference, the government decided to subsidize low interest rates for loans through private banks. State-run institutions also will offer insurance programs for private banks that provide loans to SMEs building overseas.

“Overseas construction will be a growth engine for the Korean economy for the next half-century,” said Joo Hyung-hwan, deputy minister of strategy and finance. “President Park Geun-hye’s visit to the Middle East will not end in vain.“

Last June, a major construction company formed a task force to win the bid for the Al Karaana petrochemical complex in Qatar. The project is worth 5.6 trillion won. For two to three months after being qualified to bid, the 30 members of the team prepared documents for the project by state-run Qatar Petroleum and Royal Dutch Shell. 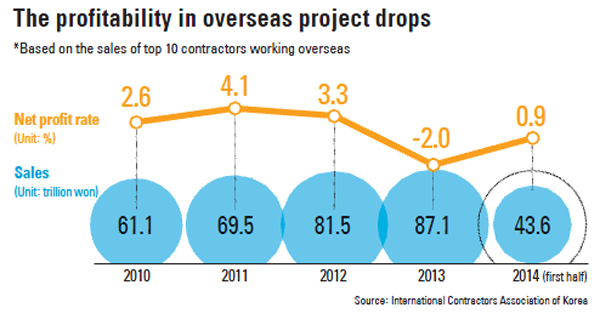 The team, however, was shocked in January when it was notified the project had been canceled due to the dropping price of oil.

“We were racing desperately to the end line of a game, but the effort became nothing,” said a team member.

The recent plunge in oil prices cut the number of construction and engineering projects worldwide, an emergency situation for local builders that receive a large portion of the revenue from overseas.

Four projects in the Middle East worth a total of $24 billion, including a refinery in Kuwait, have been postponed or cancelled. This year, the earnings from foreign orders have plummeted to 65 percent of the amount during the same period last year.

In particular, the value of orders from the Middle East fell 81.6 percent. Local builders are vulnerable to the low oil prices as half of their overseas projects are in the Middle East.

During the late 1980s to the late 1990s when the international oil price dropped from $30 per barrel to $15, local builders’ overseas revenues were halved from $10 billion to $5 billion a year. 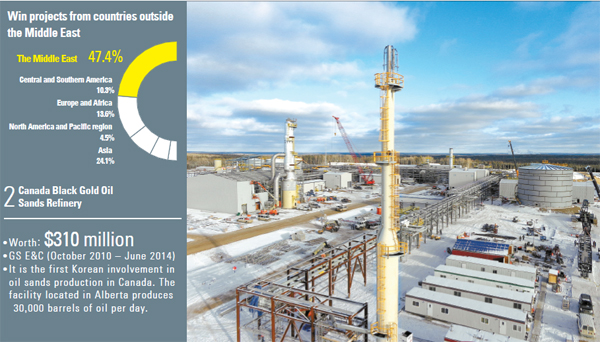 From 2008-12, overseas business for Korean companies was concentrated in the Middle East.

“The outlook is uncertain because of complicated factors generated by cheap oil, such as the imbalance of supply and demand and the tug-of-war among the oil markets,” said Choi Jung-seok, general manager of the policy planning division at the International Contractors Association of Korea.

Extended low oil prices would be a drag on the performance of local constructors. Moreover, companies face other external difficulties such as a weak yen and euro that favor competitors from Japan and Europe.

Also, the fierce competition among Korean builders often led them to bid lower than they should have. In 2009, a local company won a plant project in a Middle Eastern country for $1.3 billion, 30 percent lower than its initial proposal of $1.8 billion. 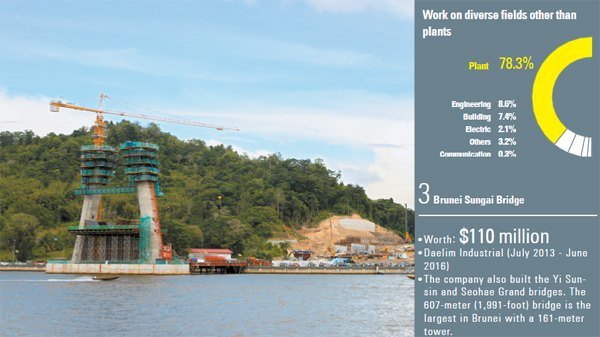 In 2013-14, major local builders lost as much as 1 billion won in profit due to cutthroat competition. The top 10 builders in overseas construction lost 1.7 trillion won, or 2 percent, in net profit in 2013.

A history of collusion is another hurdle they face. According to the Federation of Korean Industries (FKI), about 60 companies are restricted from bidding for public construction projects because of past transgressions, those who plan projects often ask for explanations. “Some foreign competitors report Korean companies to the project owners,” said one executive.

The Starlake Citynear Hanoi, Vietnam, that Daewoo E&C is developing on about 2.07 million square meters (511 acres) of land.

The company is responsible for everything from urban planning to funding to sales of lots. The project is expected to continue to 2019 and costs about $2 billion for the first stage, including developing housing sites. The company said the $2 billion was provided by domestic and foreign investors.

“The risk is high since it is a relatively longer project than others and we aren’t sure that the sale of villas will be successful,” said Lee Kwon-sang, head of the Hanoi branch of Daewoo E&C. “But it will give us much bigger profits than a project that involves construction of one building.”

Industry analysts say companies need to find markets other than the Middle East and try to be a developer that can handle multiple aspects of a project, including design, construction management and facility management.

According to the International Contractors Association of Korea, a total of $326.8 billion was made in the overseas construction from 2010 to through last year, but only 2.6 percent, or $9.3 billion was made in a high value added way like Daewoo E&C is trying to do. In the world construction industry, about 25 percent of projects are all inclusive.

The other problem is that Korean companies rely on a particular business. According to industry data, Korean companies won $66 billion worth projects last year and 78 percent, or $51.7 billion, involved plant construction, followed by civil engineering ($5.6 billion or 8 percent) and architecture ($4.9 billion or 7 percent).

Analysts advise Korean companies focused on the Middle East to explore new business areas, possibly in advanced countries that need to replace industrial infrastructure and newly industrialized nations that might be benefit from falling international prices.

“Companies need to reduce risks by having more business partners in diverse regions and by expanding their business to other sectors for sustained growth,” said Baik Heung-ki of Hyundai Research Institute.

Solutions that the government provided on March 11 reflect such opinions. The government said it will help companies to get into the newly industrialized nations, including Russia and countries in Central and South America.

Since projects like Daewoo E&C’s in Vietnam involve big money, financial institutions will help them with funding.

But industry insiders also advised that companies hurting themselves by bidding too low need to find other ways to compete and stop undercutting themselves. “I have seen many European companies having trouble making competitive bids, while Chinese and Indian companies are still behind of us in technology,” said Yoon Sang-jick, minister of Trade, Industry and Energy who recently visited four nations in the Middle East with President Park Geun-hye. “I believe Korean companies will win more contracts if they try to avoid excessive competition and the lowest-bidding system.”

Some think the government should grant amnesty to many construction companies that were either fined or banned from bidding for local projects because of collusion in the four-rivers restoration project.

The restoration project targeted the Han, Nakdong, Geum and Yeongsan rivers and was led by the Lee Myung-bak administration, which invested 22 trillion won from 2008-13. Eighteen construction companies that participated in the project were fined a total of $5 billion won by the Fair Trade Commission in 2012 for collusion in bidding.