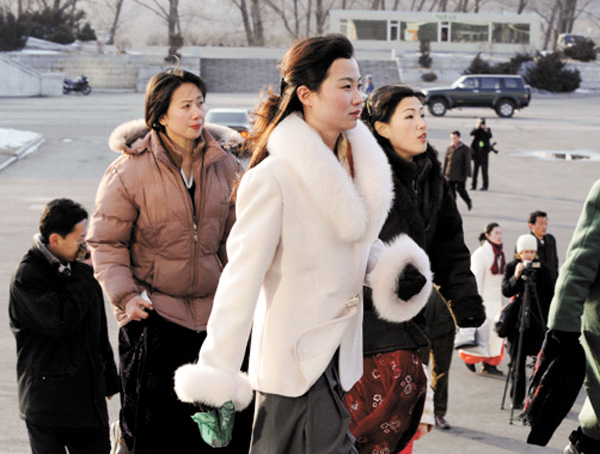 I ran into a North Korean acquaintance at a duty-free shop at the airport in Rome in April 2004. Since we went back a few years, I watched him do his souvenir shopping. He picked up a Ferragamo handbag. Its price tag was 1,600 euros ($1,685).

“My wife insisted I bring her back a designer handbag,” he said with a bashful grin.

I couldn’t help but recall scenes of hunger and poverty from North Korea that I saw on South Korean TV programs. “How can he buy a designer handbag after coming through a hardscrabble life?” I asked myself. “He should be buying clothes or food.”

After a while, I realized that the scenes of poverty we see out of North Korea are about some parts of the country - not the entire North Korea.

“When you eat at a restaurant in the Koryo Hotel in Pyongyang, you can see a fashionista as stylish as an affluent lady from Gangnam,” said a Korean-American who visited Pyongyang last October. “They show themselves off with luxury designer brands.”

North Korean officials who work at attracting capital investments from companies in Beijing told me that around 100,000 people in Pyongyang earn more than $40,000 in annual incomes. They said so-called red capitalists have emerged since North Korean society adopted a partial market economy with limited economic reform measures.

These changes led to the increase in the number of people who can purchase designer products in North Korea. They make overseas trips to China, Japan or other foreign countries to buy luxury goods.

Red capitalists who have connections with powerful officials try to open luxury goods stores in Pyongyang. They see it as a lucrative business.

One of them is considering opening a luxury goods store inside the Paik Son-haeng Memorial, which is close to Kim Il Sung Square in Pyongyang. Paik Son-haeng (1848-1933) was a wealthy merchant who dedicated himself to education and culture projects. He donated today’s equivalent of 31.6 billion won before he died at the age of 85 in 1933.

To commemorate Paik’s work for Korea, a three-story granite building was constructed in 1928 with a library on the first floor and an auditorium on the second and third floors. Though the building is obsolete now, the businessman wants to remodel it into a six-story building with an underground floor and open a designer goods store on the first floor. He also plans restaurants, coffee shops, a public bathhouse and a memorial in the building.

If South Korean businessmen have interest in opening luxury goods stores in Pyongyang, leasing spaces in Pyongyang Department Store No. 1, the biggest department store in Pyongyang, would be better than constructing a building there.