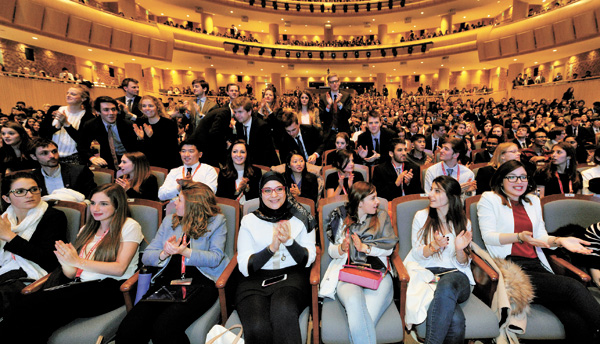 International college students gather in Goyang, Gyeonggi, on Monday for the opening ceremony of the 24th session of the Harvard World Model United Nations. Provided by Hankuk University of Foreign Studies

Roughly 2,300 students from 117 countries across the globe gathered in Goyang, Gyeonggi, on Monday for the opening ceremony of the 24th session of the Harvard World Model United Nations (WorldMUN).

The most internationally diverse college-level model UN conference is scheduled to run throughout this week.

Hosted by Hankuk University of Foreign Studies (HUFS) in Dongdaemun District, eastern Seoul, and sponsored by the Ministry of Foreign Affairs, the annual conference will touch on various issues this year, including climate change, nuclear missiles and the Ebola outbreak.

Noting in his keynote speech that this year marks the 70th anniversary of the UN’s foundation, Vice Foreign Minister Cho Tae-yul mentioned various reasons why Korea serves as an apt backdrop for the session, from the highs of the “Miracle on the Han River” to the lows of living below nuclear-active North Korea. 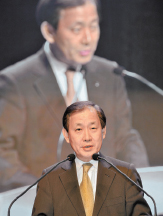 The president of Hankuk University of Foreign Studies, Kim In-chul, gives a welcoming speech to more than 2,000 students from 117 countries.

The Miracle on the Han River refers to the country’s significant economic growth in the 1970s and 1980s, which took Korea from living on international aid to being an Organization for Economic Cooperation and Development donor country.

Kim In-chul, the president of HUFS, said that after a brief look at the agenda prior to his speech, he found two topics that sparked his attention the most: missile defense systems and development.

In reference to the former topic, Kim said, “It has been an international hot potato because each nation has a different opinion on the features and capabilities such systems can have.” He continued that Korea has a “clear interest” in this issue because of Pyongyang’s nuclear ambitions.

Referring back to 2012 when U.S. President Barack Obama gave a special lecture at HUFS on March 26, Kim also took the opportunity to promote the school, quoting Obama as saying it has the “world’s finest language programs.”

On his third visit to Seoul, Obama became the first incumbent U.S. president to speak with local students. He said that “the urgent work of preventing nuclear terrorism by securing the world’s nuclear materials needed to be addressed,” adding that Pyongyang is following a path of aggression, which will only lead to more isolation in international society.

Founded in 1991 by a group of Harvard University students, WorldMUN is based on the principles of the “WorldMUN Spirit,” which refers to a movement of friendship and cooperation across borders and a deeper understanding of cultures and perspectives, according to its official website.

In accordance with that spirit are the various social events held during the evenings and onward, aside from the hours of debates that run during the day. While all conferences are slated to take place at Kintex in Goyang, the informal gatherings aim to break the ice between the participants.

Starting on Sunday with the Night Zero event at One Mount Snow Park in Goyang, international students gathered to meet fellow delegates for the first time over casual drinks and music.

The Global Village event held at HUFS on Monday night was a chance for students to promote their native countries by decorating a booth with cultural aspects representing their homes.

On Tuesday, a party titled Gangnam Style will be held at Octagon Seoul, a club in Gangnam District, southern Seoul, followed by the talent show Cabaret the following night.

Hongdae Night on Friday, held at club NB1 in Mapo District, western Seoul, will be similar to Tuesday’s festivity.

The social events will wrap up Friday with a farewell party on Some Sevit, an artificial island located at the southern end of Banpo Bridge in Seoul.