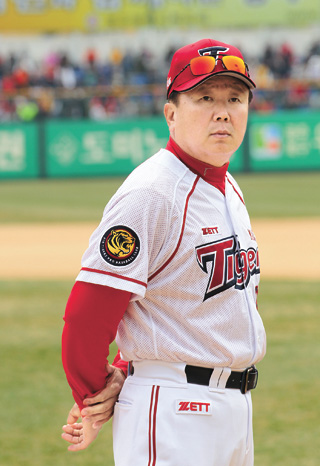 In the 1990s, when Korean college students had a bad semester, they joked, “My GPA is like Sun Dong-yol’s ERA.”

If their GPA really was that low, they probably would have been expelled. According to the Korea Baseball Organization, the pitcher’s career ERA is 1.20.

Sun, 52, was regarded as a “national treasure.”

In 2011, celebrating the league’s 30th anniversary, the KBO conducted a vote among coaches, reporters and fans for its 10 all-time best players by position, including designated hitter. 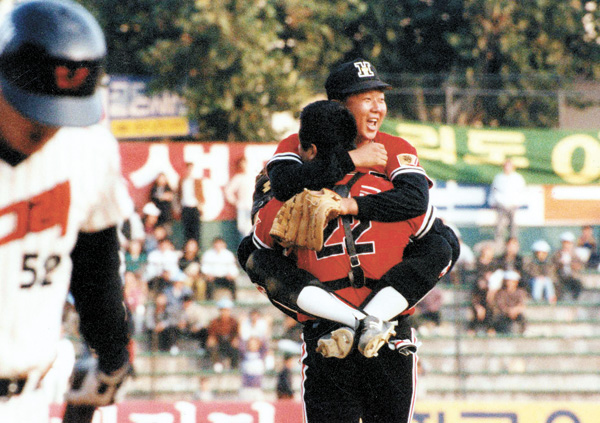 For pitcher, not surprisingly, it was Sun Dong-yol, a result few would dare dispute.

Before moving to the Chunichi Dragons in Japan’s Nippon Professional Baseball (NPB) in 1996, Sun won six Korean Series titles, three regular season MVP awards and six Golden Gloves in his 11 seasons in Korea. But these are just few of his achievements in the KBO League.

Sun started playing baseball when he was 10 years old and was a shortstop. The Gwangju-native started pitching at Songjun Middle School.

Sun became a national star during his senior year at Gwangju Jeil High School. In the President’s Cup, he was named MVP after leading the team to the championship. Then ne threw a no-hitter against Kyunggi High School in a qualifying game on the Bonghwang High School Baseball Tournament.

As a top prospect, Sun was first scouted by Hanyang University, but after Korea University persuaded his father, the pitcher changed his destination.

In his freshman year, Sun was already member of the Korea national team. In his sophomore year, he was named MVP of the 27th World Baseball World Cup after leading Korea to the championship on its home soil in September 1982.

In the final against Japan, Sun gave up two runs on five hits in nine innings in Korea’s 5-2 victory. At the World Cup, he was 3-0 with a 0.31 ERA in four games and a tournament All-Star.

That was good enough to gethim an offer from the Los Angeles Dodgers, which he declines.

As an amateur, Sun’s nickname was Sea
Squirt because he had many pimples on his face.

However, he already was as strong an any adult, thanks to natural medicines and stamina food given to him byhis father.

“I ate honey and ginseng a lot from my childhood and I think my health resembles my father’s a lot,” Sun said in a 2000 interview.

After graduating from Korea University, Sun made more headlines off the field. Following his father’s wish that he attend graduate school and continue on the national team, Sun spurned the KBO’s Gwangju-based Haitai Tigers (now Kia Tigers) for the semipro Hankook Cosmetics.

Sun eventually joined the Tigers in 1985.

Because of his contract with Hankook Cosmetics, he was not able to play in the KBO League until the second half of the season. He appeared in 25 games, going 7-4 and finishing with a league-best 1.70 ERA in 111 innings pitched.

The following year, Sun dominated the KBO League with the Tigers. With a fastball clocked at 155 kilometers (96 miles) per hour, fans started to call him the Mt. Mudueng Bomber. [Mt. Mudueng is in Gwangju.]

After suffering a shoulder injury in 1992, Sun became a closer, but his dominance continued.

“When the Tigers were leading by tworuns, I think they intentionally showed opponents Sun warming up,” said Kim Kwang-lim, batting coach for the NC Dinos. “When we saw him warming up, players were just mentally shaken and thought the games was over.”

Among Sun’s achievements, his ERA titles seem untouchable. He had the leagues lowest ERA from 1985 to 1991. His worst season was in 1994, when he finished with a 2.73 ERA, the only time Sun was above 2.00 ERA during his career in KBO League.

Sun also had 29 career shutouts, still the KBO record. He led the league

At the age of 35, Sun left the KBO to play for Japan’s Nippon Professional Baseball after signing with Chunichi Dragons in 1996. There, he earned the nickname Sun of Nagoya. But in his debut year, Sun had worst season ever, going 5-1 with three saves and a 5.50 ERA.

“I really wanted to quit and go back to Korea,” Sun recalled.

Sun retired Nov. 22, 1999. The following year, he received an offer from the Boston Red Sox, but since the club required a tryout, Sun said “no thanks.”

As a manager, Sun won two KBO League titles with the Samsung Lions in 2005 and 2006. With the Lions, he transformed Samsung’s traditional offense-based to emphasizing pitching, which some fans didn’t like.

Despite the poor performance, Sun was given a new contract by the club, but fan criticism exploded, he resigned just six days after signing. It was a disappointing ending for the franchikse’s brightest star.

Although his time as manager wasn’t as successful ashis playing days, Sun remains the best pitcher the KBO has ever had.

“When I was on the mound,” he said, “I always pitched with the mind set that I was the best.”