Seoul stands out as guest of honor at French biennale

Seoul stands out as guest of honor at French biennale

Seoul has been selected as the guest of honor for the 2015 Saint-Etienne International Design Biennale. Exhibited works include the collaborations of internationally renowned designer-architect Alessandro Mendini and Korean craftsman Gang Geum-seong on “Poltrona di Proust Coreana,” far left, and Daniel Libeskind and Yang Byeung-yong’s collaboration on the low table “soban,” center. Korean sculptor Lee Bul is also exhibiting her work at the Musee d’Art Moderne et Contemporain de Saint-Etienne Metropole. Above is “Mon grand recit Weep Into Stone” (2005). Provided by the Biennale

SAINT-ETIENNE, France - Seoul has been chosen as the guest of honor at the recent International Design Biennale in this city located south of Paris.

Saint-Etienne has hosted the event since 1999. It was the first French city to be appointed a Unesco City of Design, in 2010, for successfully transforming itself from a heavily industrial area to one renowned for art and design - largely thanks to the biennale.

The ninth edition of the event kicked off on March 12. Under the theme “Experiences of Beauty,” the show will run for a month.

A stunning feature of the biennale is its venue. It is mainly held in the old Manufacture d’Armes, a former rifle production factory for the French Army.

The building, which dates back to 1896, closed down in 2000. The modern design objects displayed against the shabby structure creates a visual sight that is next to none. 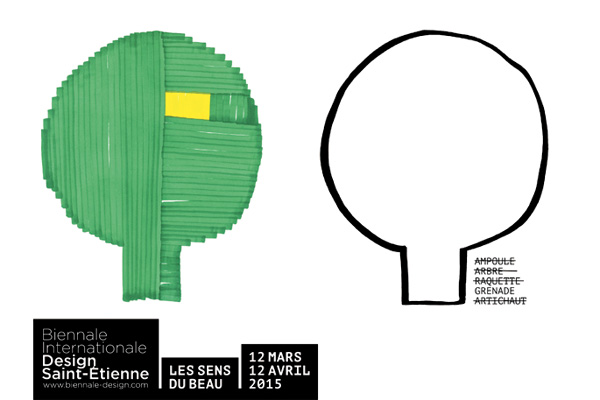 The Design Biennale’s poster, designed by two students from ESADSE.Provided by the Biennale

And creations by Koreans catch the eye against the backdrop of the armory.

“The experiences of Korean beauty in this exhibition lie in the materials used,” said Choi Kyung-ran, Dean of the Graduate School of Techno Design at Kookmin University, who curated the Seoul exhibition, “Vitality, Beyond Craft and Design,” at the biennale.

Breaking down the boundary between craft and design was a point of interest for Choi.

“I’d like to present the beauty of natural materials from Korean traditional culture such as rice paper, wooden craft and ceramic materials,” she said.

“All these works are related to those materials. Moreover, the experiment of collaboration between craftsmen and designers is also something to take note of in this exhibition.” 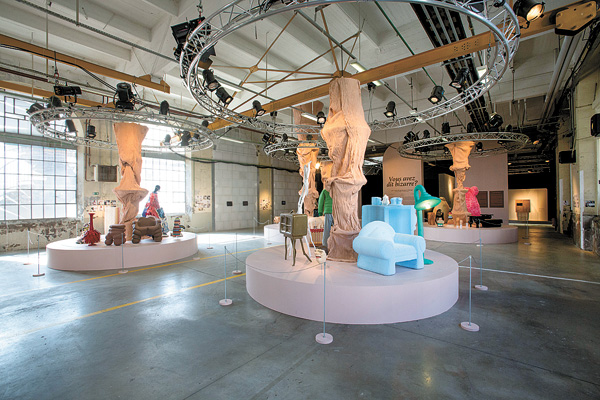 The main venue’s “Grotesque and Design” section. Provided by the Biennale

Another collaboration includes a low Korean table by Daniel Libeskind, the world-renowned architect behind the 9/11 Memorial at Ground Zero in New York and Korean craftsman Yang Byeung-yong.

“Why did they collaborate?” asked Choi. “They like to open a new vision in developing objects and products in ordinary life and to foster production.

“Craftsmen are always dependent on their hands. There are certain limitations in quantity, and sometimes quality. So what we wanted to do was to demolish their limitation by collaborating with designers. Particularly this year, we invited world-famous designers to collaborate with Korean craftsmen,” said Choi. 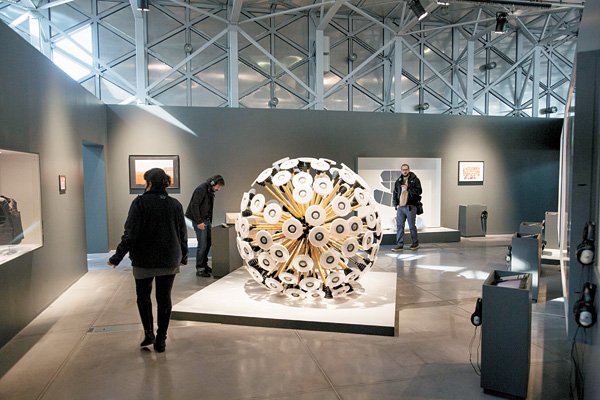 “The outcome is amazing. Daniel Libeskind even said he loved this low table more than some of his past architectural designs.”

According to Choi, France has been more familiar with Chinese and Japanese designs when it comes to East Asian art. But through the Seoul exhibition, “visitors are able to experience the beauty of Korea, which they haven’t seen before - something that’s very oriental yet very modern. Something that they want to use,” she said.

About 30 Korean designers and craftsmen have been invited to showcase their work in Saint-Etienne.

There are 55 exhibitions altogether at this year’s design biennale by 26 curators who all interpret their experiences of beauty in their own languages. 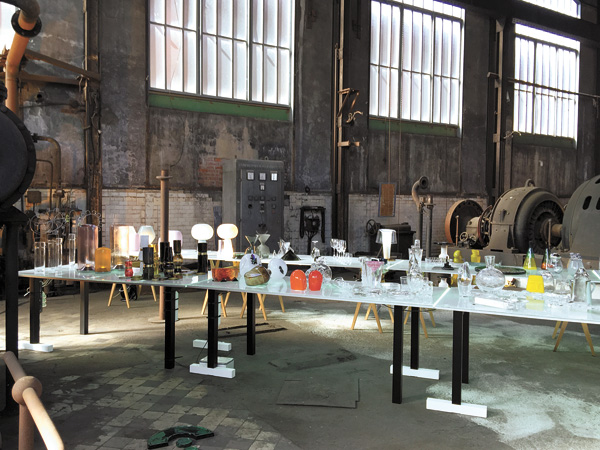 Glass work on display at the Musee de la Mine, as an “off exhibition” of the biennale. Provided by the Biennale

For example, one of the exhibitions, titled “No Randomness - The Coherence of Shapes,” displays the usual objects we see every day.

The exhibition’s French curator, Oscar Lhermitte, asks visitors whether they’ve ever wondered why manhole covers are round, or why a meter measures a meter, or why an A4 sheet of paper measures 210 millimeters by 297 millimeters and so on.

Lhermitte says the answers to these questions themselves are “beautiful.”

“A ratio to determine the size of an image, an octagon to represent a pictogram, a smell to materialize the intangible .?.?. These ideas are not new, there is nothing original about them, no one knows or can remember the name of the person who thought of them, these are ideas for mass consumption,” explained Lhermitte. “But they are beautiful.”

Vivid reds, yellows, greens and blues were added to the usually greyish city as visitors from across the globe began to swarm there last week for the biennale. Colorful visuals representing the event were plastered on buildings and trams.

“For each edition, the biennial looks for international works that are able to reveal designers’ proposals to address different societal challenges,” said Ludovic Noel, director of the Cite du Design, which organizes the event.

“The biennial reveals young talents and their creations in all the exhibitions. The ESADSE [Saint-Etienne Higher School of Art and Design] accompanies the emergence of personalities in art and design, through the completion of personal projects, exhibitions or projects with partners.”

The visual art that is plastered all over the city has been designed by two students at ESADSE. About 30 students proposed their work and two, Sylvain Reymondon and Lucas Ribeiro, were chosen.

“The idea was to oppose two ideas of the shape,” said Reymondon. “We positioned identical shapes next to each other, but one is filled with color and the other is just an outline of the shape.”

Following this year’s theme, the students said they tried not to push a notion of what beauty is, calling it “very personal and subjective.” Instead they wanted to engage in some kind of graphic discussion.

“We didn’t want to define it, but to raise questions,” Reymondon explained.

Such an important visual identity could have been created by one of the designers invited to the event. The biennale works closely with the students of ESADSE.

“In the beginning, it was more of a school project. Of course, the aim was to produce graphic design for the biennale, but the primary objective was really for the students to make the project for the school and for them to learn things,” said Michel Lepetitdidier, a teacher who supervised the work.

The biennale also exhibits many of the works by the students.