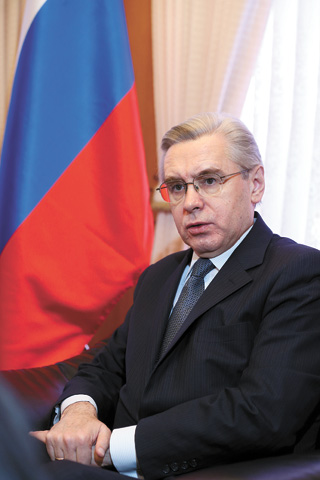 Newly appointed Russian Ambassador to Seoul Alexander Timonin called U.S. efforts to deploy an anti-ballistic missile system to the Korean Peninsula a “unilateral and negative” move that must be halted.

“We believe this can increase tension not only on the Korean Peninsula but in Northeast Asia,” Timonin said in his first interview with Korean media on Thursday at the Russian Embassy in central Seoul.

He added that Moscow’s opposition to the U.S.-led Terminal High Altitude Area Defense (Thaad) was “a measure to evade bringing confrontation to the region.”

The top Russian envoy additionally told the Korea JoongAng Daily and the JoongAng Ilbo that Washington should “refrain from all acts that can exacerbate tension within Northeast Asia.”

Beijing and Moscow have been especially outspoken over the deployment of the Thaad battery in Korea, fearing it could trigger a regional arms race.

Timonin, the first Russian ambassador to Seoul who previously served as the top envoy to Pyongyang, also spoke of the upcoming celebration in Moscow to commemorate its World War II victory.

Moscow has extended invitations to the event to both South Korean President Park Geun-hye and North Korean leader Kim Jong-un.

“Personally, I believe that, should a summit between North and South Korea’s leaders happen in Moscow, it would be good for improving inter-Korean relations,” he said. “But Russia believes that North-South Korean relations can be improved - more than anything - through the efforts of the two countries themselves. Russia’s role is to support this process and to help create an environment that will be favorable to a North-South dialogue.”

Timonin, who has spent the past 35 years involved in diplomacy, served as ambassador to North Korea between 2012 and 2014.

He previously served as a diplomat at the Russian Embassy in Seoul three times for a total of 12 years. “I think my lifetime of activity as a diplomat is related to Korea,” he said.

Timonin arrived in Seoul in January with his wife, Natalia, and dog, a cuddly brown Norwich terrier. His pet, a relatively rare British breed whose name is Simona, “is a very nice and friendly dog that likes all people,” he added.

This September marks the 25th anniversary of bilateral ties between Russia and Seoul, a “very important commemoration,” he continued, “so we want to actively mark this occasion on a wide spectrum.”

This will involve working with the Korean Ministry of Foreign Affairs, civilian organizations and the academic and scientific arena. The embassy also plans to host seminars, concerts and film festivals.

Although he spoke in Russian, Timonin concluded his interview in Korean, in which he is fluent: “To the Korean people, I wish great happiness and success.”

The following is an edited excerpt of the written and spoken interview with Timonin.

Q. Moscow has extended invitations to many world leaders for its celebration marking the 70th anniversary of its victory in World War II. Can this be a venue for inter-Korean talks?

A. Russia does not just call this our own victory, but that of the anti-Hitler alliance in defeating Nazism and fascism. The victory in World War II played a big role in the end to Japanese colonial rule and the liberation of the Korean Peninsula. So this victory day can be seen as a celebration for all of us. Because of this, President [Vladimir] Putin has invited many countries’ leaders, including both [the North and South Korean leaders.]

What do you bring from your experience as ambassador to Pyongyang, and what is the difference between the two Koreas?

The two countries have different political ideologies and economic systems. At the same time, the same people live in both countries and they are very diligent, amicable and have a strong sense of pride. ... Working in the Democratic People’s Republic of Korea has helped me to better understand the Korean people. The North and South Korean people both long for peace and prosperity, and I am assured that both are prepared to put in the effort. And they both equally yearn for unification. And Russia sees it as our task to help fulfill the wishes of the Korean people.

What do you think of trilateral cooperation among Russia and the two Koreas?

Trilateral economic cooperation among [the three] would have great significance for the future of Korea. Projects linking the Trans-Siberian Railway and an inter-Korean railway, the construction of an electrical grid as well as gas pipes connecting Russia and North and South Korea, are not only economically feasible but will contribute to peace and enhanced stability on the Korean Peninsula and in Northeast Asia. In 2014, Russia and [North Korea] completed the Rajin-Khasan railway and the restoration of three ports in Rajin. ...We look forward to the regular circulation of freight between the ports of Rajin and South Korea in the future.

How does Moscow evaluate the Korean government’s policies in the Northeast Asia Peace Initiative and the Eurasia Initiative?

The similar approaches between Korea and Russia in creating a new bridge between Europe and Asia open broad prospects for cooperation between Korea and Russia. The South Korean leadership’s Northeast Peace and Cooperation Initiative and Russia’s position share many similarities. We are closely united in the thought that all the countries in this region need to consider a relationship of legal understanding to resolve current pending issues.

What does the 25th anniversary of the establishment of diplomatic ties between Russia and South Korea signify?

Our friendship and cooperation goes back 130 years. The first agreement between our two countries was the 1884 treaty of amity and commerce. ... The establishment of diplomatic relations 25 years ago was one of the symbols of the end of the Cold War era, and since then - in a very short period of time - we have shown a lot of progress. Trade volume has steadily increased and in 2014 reached $25.8 billion. More than 600 Korean companies are active in the Russian market.