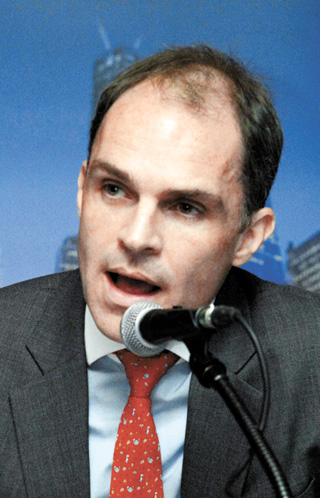 Despite a steep drop, crude prices are expected to eventually rebound with Brent crude reaching around $75 per barrel over the long term and about $60 by the end of the year, according to Mark Keenan, who heads commodities research for Asia at Societe Generale, a French investment bank.

At a press conference Tuesday held at the Conrad Seoul in Yeouido, western Seoul, covering the recent collapse in oil prices, Keenan added that from a long-term perspective, oil prices would pick up and not fall below $30 per barrel for WTI.

Keenan said a major factor for the plunge in oil prices was a supply glut and “a strategic response” by Saudi Arabia and other members in the Organization for Petroleum Exporting Countries (OPEC), indicating their refusal to cut oil output to maintain market share amid growth of shale in the United States.

“The main reasons for the decline were slowing economic growth in Europe, slowing down in China,” he said. “But most importantly, it was the growth of shale oil, expensive new oil in the United States.

He forecast that shale oil production would slow starting this year, as many shale producers have already completed sales at 2014 levels - about $100 per barrel. These hedges by shale producers will expire in the middle of 2015, he added, and the oil market will rebalance afterward.

In the near term, oil prices will not fall below $30 for WTI, despite the latest crash.

“We expect $30 to be the absolute low in price for WTI, on the downside,” he said.

WTI prices dropped to their lowest levels since March 2009 amid fears over a continuous supply glut.