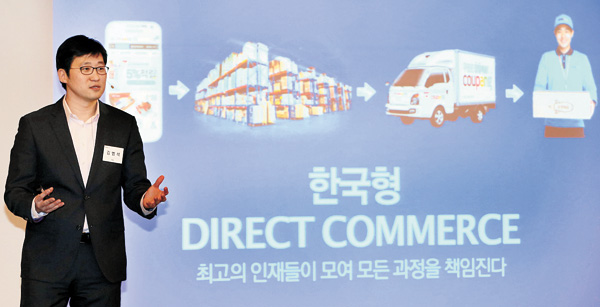 Kim Bom, Coupang’s CEO, presents the company’s plan at the Westin Chosun Hotel in downtown Seoul on Tuesday. Provided by the company

Coupang, a top mobile commerce company, announced on Tuesday that it will introduce a new business model among Korea’s online retailers, taking full responsibility for the entire process of product purchasing, sales and delivery.

Currently, Coupang leads the deal-of-the-day market, or what’s better known in Korea as “social commerce.” Internet-based companies of its kind usually serve as a platform linking sellers and buyers.

But Coupang founder and CEO Kim Bom said at a press conference on Tuesday that his company is aiming to follow in online retail giant Amazon’s footsteps.

“Our service won’t just end up enabling customers to search for the goods they need online,” he said. “We will fully take care of the online shopping experience and even go beyond Amazon by boosting a value-added delivery service.”

He also said the company will launch a trial service in Ilsan, northwest of Seoul, which will deliver household supplies and diapers that parents can receive just two hours after an order has been placed. In Korea, discount chain bellwethers such as E-Mart and HomePlus deliver goods purchased on their homepages and mobile apps within hours, setting a certain time for arrival, but they impose various restrictions, including hefty delivery charges and delivering within a limited timeframe.

Kim said the company would expand its “within two hours” delivery service nationwide in the near future.

Coupang, launched in August 2010, already operates a so-called bullet delivery system that promises shipping within a day, which differentiates it from its rivals. Another competitive edge it has is Coupang Man, the name that describes the 1,000 deliverymen who are not merely responsible for shipping goods but also for giving customers a highly considerate and sophisticated service.

An example of ways these deliverymen go above and beyond with their customer service is by texting customers in advance to check if they should ring the doorbell or not while delivering a package in case a sleeping baby is in the house. They have also been known to wish clients a good day by leaving handwritten notes on parcels.