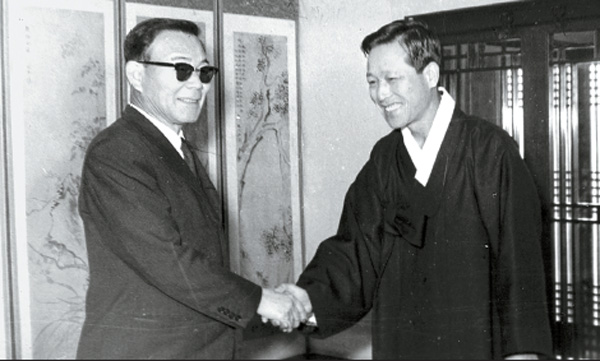 Kim Jong-pil, right, shakes hands with former President Yun Bo-seon during a New Year visit to Yun’s house on Jan. 2, 1964. In a gesture of courtesy, Kim presented the former leader with a 1952 model Lincoln sedan, only to see it returned a day later. [JoongAng Photo]

This is the seventh in a series of articles on the life and times of Kim Jong-pil, a two-time prime minister, based on extensive interviews with the 89-year-old. This installment describes Kim’s first meeting with Paik Un-hak, a mysterious fortune-teller who told Kim before the May 16 military coup that his plan would succeed no matter what. After the coup, which Kim describes as a revolution, Paik made another prediction that Park Chung Hee would rule the country for about 20 years - a reign that would end with his death.

Timing determines success or failure. The May 16 revolution was no exception.

There was one meeting with a man known for his fortune-telling prowess that illustrated the importance of proper timing for a feat as important as a military revolution.

It was late April 1961, less than a month before we set in motion the revolution. I was finishing up a plan for armed forces mobilization at the time of the revolution.

One Sunday morning, Seok Jeong-sun, my fellow military academy graduate who was running a transportation business at the time, came to visit me at my house.

“Let’s go to Paik Un-hak, the fortune-teller,” Seok said. Paik was a fortune-teller renowned for his face-reading skills. He gained particular attention from political circles after he predicted who would be elected for parliamentary seats. His predictions turned out to be right.

Seok had joined my campaign a year earlier for a sweeping reshuffle of military leadership and was forced out of the army as a result, just like myself, in February 1961. While I devoted myself to realizing the revolution with Park Chung Hee, Seok turned down my proposal to join in, saying he was worried about potential risks to his wife and children. I asked him to keep our plans secret, which he did.

After his discharge, Seok jumped into the transportation business after buying two buses, but it did not go well as he hoped. That’s why Seok wanted to visit the fortune-teller. He wanted advice about his business.

As Seok and I entered his room, Paik kept staring at me. Then all of a sudden, he said this out of the blue: “It will be done as planned!”

“What do you mean it will be done?” I asked.

“The revolution you are planning,” he replied.

Startled, I snapped back. “Are you out of your mind? It could get all of us killed here if someone heard you saying that!”

Paik started laughing. Then he got serious.

“The time has come as it is what everyone wants now,” he said. “Just do it and put your fear of failure aside. No one will stop you.”

To this day I have no idea how he was able to see our plans just by reading my face. But at important turning points in history, fortune-tellers like Paik sometimes know what the people want and expect.

About a month before my meeting with Paik, on March 22, a large rally was held in front of Seoul City Hall demanding the abolishment of the anti-Communist and anti-demonstration laws. Demonstrators set police vehicles on fire and even stole civilians’ cars. The rally symbolized the incompetence of the Chang Myon administration and demonstrated the social chaos rocking the country.

A day after the rally, then-President Yun Bo-seon called in leaders of the ruling and opposition parties to stave off the social disorder. But they failed to come up with any tangible solutions.

When I met Paik, I sensed that what he told me out of the blue represented the people’s demand for a change that would reform the country from top to bottom.

I cut short Paik’s prediction and told him to read my friend’s face and predict his future.

“Though you came here as a civilian,” Paik told Seok, “I see that you are from the military. You’d better wrap up your business with cars.” This caught my friend off guard as he had said nothing to the fortune-teller about his business.

As we were leaving, I told Paik not to tell anyone what he had told me. He laughed again.

But his fortune-telling boosted my confidence in the plan for revolution. Rumors were already spreading among officers that some faction within the military was pushing for a coup.

But the leadership brushed it off as a groundless rumor and took no action.

My relationship with fortune-teller Paik did not end with that first encounter. About two months after the May 16 revolution, I invited him to dinner with Park Chung Hee.

Staring at Park’s face, Paik said, “Sir, you will remain on the throne for about 20 years. Rule the country as you plan.”

Park did not say anything but smiled.

I asked Paik what would happen after 20 years.

On our way home from restaurant that night, Paik whispered to me, “This is an ominous reading. I think he will die at the end of his 20-year rule.”

I did not pass Paik’s prediction on to Park, thinking it was nothing more than superstition. But on a fine autumn day 18 years later, his ominous prediction came true.