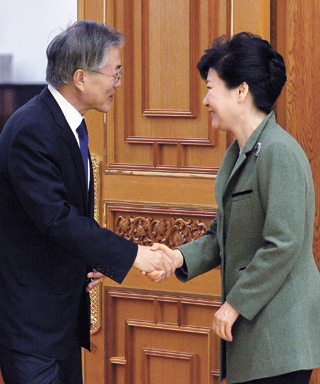 President Park Geun-hye, right, greets Moon Jae-in, left, chairman of the main opposition New Politics Alliance for Democracy, at the Blue House on Tuesday. It was their first official meeting since they competed in the presidential election in 2012. Park invited chairmen of the ruling and opposition parties to discuss state affairs. [NEWSIS]

President Park Geun-hye endured pointed criticism about her economic policies from former presidential opponent Moon Jae-in during a rare meeting Tuesday to talk about the nation’s most pressing issues.

During the talk between Park and leaders of the ruling and opposition parties, Rep. Moon, chairman of the main opposition New Politics Alliance for Democracy (NPAD), urged the president to shift her economic policy away from short-term economic stimulus. He also pressed Park to adopt his own policy of “wage-led growth.”

Park received Moon and Kim Moo-sung, head of the ruling Saenuri Party, at the Blue House Tuesday afternoon. The conversation with the leaders of the ruling and opposition parties started around 3:05 p.m. and lasted for about 100 minutes.

It was the first time Park and Moon, rivals in the 2012 presidential campaign, sat down for a substantial discussion since a televised presidential debate on Dec. 16, 2012.

After Park gave polite opening remarks, Moon didn’t hesitate to aggressively attack her on economic policy and present a number of demands.

Park started her opening remarks by promoting the outcome of her recent trip to the Middle East and asked for the legislature’s support to use it as an opportunity to boost the economy. “The government’s policies are actually concluded through legislation at the National Assembly,” she said.

Moon, who was elected last month to head the liberal NPAD, promised his party’s cooperation to use Park’s diplomatic accomplishments for economic recovery. Then he gave lengthy opening remarks with several demands of the president.

“The economy is too poor and the people are having a hard time making ends meet,” Moon said. “The government’s economic policies have failed to improve the quality of life of the people. Economic democratization and welfare are also regressing. Because of policies centered around conglomerates and export-driven economy, the middle class has collapsed and experts are worrying about deflation.”

He demanded Park change the direction of her economic policy. “We need wage-led growth,” he said.

Moon demanded that the minimum wage be increased and corporate tax be increased as well. He also said more tax should be levied on earners of high incomes.

Moon said the working class is suffering from skyrocketing housing costs and claimed that Park failed to follow through with her presidential campaign promises. Moon also urged the Park government to come up with a solid plan to deal with the mounting household debt.

While the Blue House and the political parties said the economy would be the focus of the meeting, Moon tried to insert the political issue of inter-Korean relations in his opening remarks.

“Inter-Korean relations should be approached from the economic perspective,” he said, urging Park to have a summit with North Korea’s leader Kim Jong-un before the end of this year. “We will provide bipartisan cooperation,” he said.

In his opening remark, Saenuri Chairman Kim tried to stress the importance of bipartisan cooperation with the government.