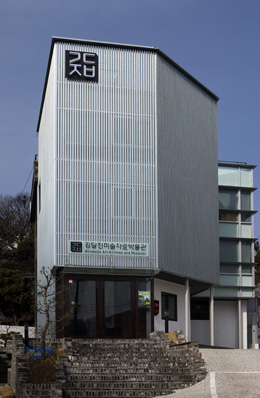 The KimDaljin Museum of Art Archives, operated by the pioneering curator of modern and contemporary Korean art who gave his name to the institution, reopened last Thursday after it finally found a new site in Hongji-dong, central Seoul.

Kim, 60, told reporters last Monday that he was deeply concerned when the state-run Arts Council Korea’s term of support expired in September, forcing the museum to relocate from near Hongik University in western Seoul.

With help from supporters, particularly architect Kim Won, Kim Dal-jin bought a house in Hongji-dong and remodeled it into a museum.

The number of documents in the archives, which includes 21,000 books, 20,000 art exhibition pamphlets and numerous news clips on about 270 local artists, is vast.

The reopening show displays 250 highlights from the archive. One of these is a rare book about a 1918 exhibition of the Korean ceramics collection at the Victoria & Albert Museum in London.