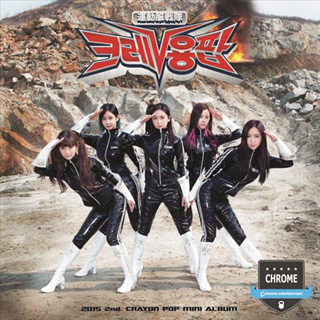 Chrome Entertainment, the five-member girl group’s agency, said Wednesday that Crayon Pop wanted to showcase their digital single on the streets of Dongdaemun, which is one of the most crowded shopping areas in Seoul, prior to the official release of the song online.

“FM” will be unveiled online on March 27.

After the street performance, the girl group will hold outdoor shows in other parts of Seoul - from Myeong-dong, central Seoul, to Samseong-dong, southern Seoul, to Hongik University, western Seoul.

“Crayon Pop unveiled ‘Bar Bar Bar’ in 2013 at an open-air stage near the Dongdaemun shopping district,” said Chrome in a press release.

“By having street concerts once again, they said they wanted to reminisce about their early days.”

Crayon Pop released their debut album in 2012 but did not gain much publicity amid the sea of K-pop girl groups.

But their digital single “Bar Bar Bar,” released in June 2013, became a huge hit because of the music video accompanying the track.

The girl group wore uniforms and safety helmets and performed a quirky dance routing in the video, which went viral.

With “Bar Bar Bar,” Crayon Pop swept almost all the best newbie of the year awards from Korea’s major music festivals in 2013, but the girl group has been struggling to impress music fans with its following songs.

For “FM,” the girl group once again wears uniforms.